Goldfish are one of the most popular pet fish choices and were the first type of fish to be kept as pets centuries ago in Asia. Despite their name, there is a wide array of goldfish types with different colors and patterns as well as fancy fin and tail styles. Goldfish also come in several sizes and can do well in a home aquarium setup or a pond in your backyard garden.

Types of Goldfish That Thrive in Aquariums

There are over 300 types of goldfish currently, although many of these are just varieties of other basic "types." Fancy goldfish can differ from each other based on color, eye shape, and fin and tail shape. While you can keep just about any type of goldfish in a pond or aquarium, there are certain breeds that do best in tanks and do not thrive in ponds usually due to their sensitivity to cold and their delicate features.

The black moor is a type of fantail goldfish that is either all black or mostly black with some areas on its fin tips and belly that have a bronze color. They can have normal or protruding eyes. Black moors are also called "kuro demekin" by the Japanese and dragon eye by the Chinese. Black moors with telescoping eyes are not a good fit for pond living because they have limited vision. These fish can grow up to 10 inches long. 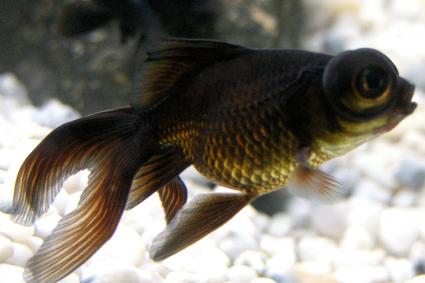 This goldfish has eyes that protrude from the sides of its head. Its size, body and fin shape are like that of the black moor but this variety comes in other colors like orange, white, calico and red and white. The telescope eye goldfish is not a good choice for a pond due to their poor eyesight and the chance its eyes can get injured. 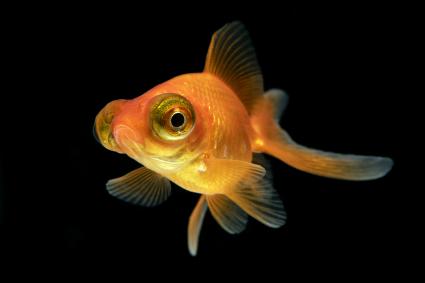 The panda moor is another fantail goldfish variation that is black and white. It is a color variety of the telescope eye and black moor goldfish. They can grow up to 10 inches long and like other similar fish, these should be kept in aquariums only due to their poor vision and delicate eye structure. They also are very sensitive to cold water temperatures. 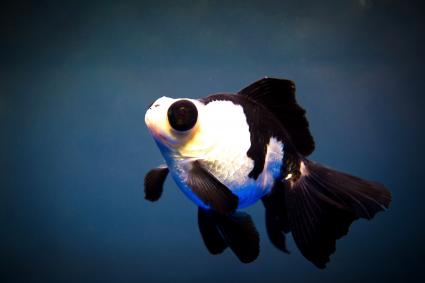 The bubble eye goldfish gets its unusual eyes from fluid-filled bladders around its eyes. These sacs make it hard for the fish to see, so these fish need to live in an aquarium without any sharp or rough-edged ornaments or rocks. They should not live in ponds. These fish are also unusual in that they lack a dorsal fin. They grow to about five inches in length. They can come in many colors and patterns, including calico. Their body type, tails and fins are similar to that of a fantail goldfish. 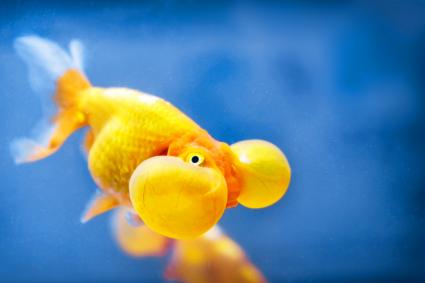 Also known as "choten gan", these goldfish have eyes that seem to look permanently up and protrude from the side of the fish's head. It is said that the fish were bred to have this odd eye posture so that they would be looking up at the emperor of China when he looked down into his ponds. This goldfish has an oval-shaped body and does not have a dorsal fin. They can grow up to about eight inches. Celestials can live in a tank or a pond, but due to their poor vision it's better for them to live in a tank. They have a lifespan of about seven years. 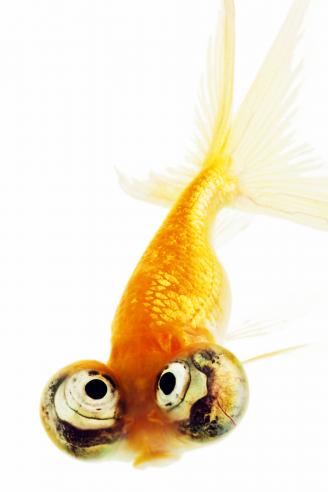 This goldfish gets its name from their domed scales that look like tiny pearls throughout its body. It has an egg-shaped body and has fins and tail similar to the fantail goldfish. They can also develop a very large mass egg-shaped mass on their heads and this variety is called the Crown Pearlscales, or "chinshurin" in Japanese. Pearlscale goldfish can grow up to eight inches. You can keep this type in either an aquarium or a pond, but they are not a good choice for ponds in cold climates. 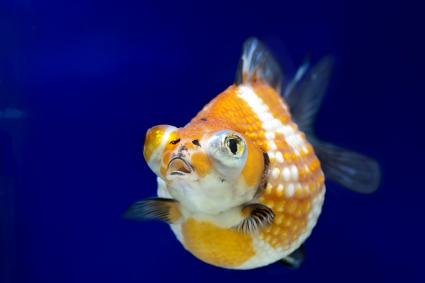 Types of Goldfish For Ponds and Aquariums

Most types of goldfish can live in either environment and are popular choices for both environments. Just make sure you pair goldfish together that are compatible with each other.

The common goldfish is the basis for all the goldfish types created by fancy breeders. They have a short tail and a short body compared to other types of goldfish. They come in many colors including shades of red, yellow, orange, bronze, black and white. Common goldfish can do well in a home aquarium or in a filtered pond. Their lifespan can be up to 40 years if kept properly and they can reach up to 12 inches in length in a pond. Common goldfish are probably the most inexpensive type of goldfish and can be easily found at pet stores and through breeders. 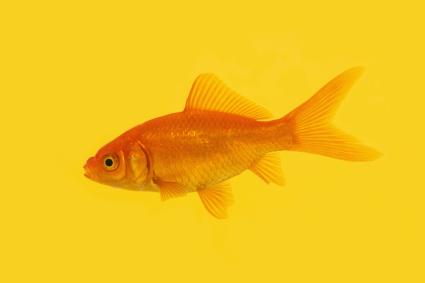 This is the only type of goldfish that was created in the U.S. Comets stand out for their long tails that are thought to resemble the trail of a comet and can be as long as half the fish's body. They also have a longer, slender body compared to the common goldfish. They come in many colors including yellow, orange, red, black and white. They usually have at least two colors, and red and white versions are very common. There is also a popular Sarassa comet that is a dark red color on top with a white body and fins or they will be white with dark red patches. Comets can live in an aquarium or in a backyard pond. They can reach lengths of 10 to 12 inches in a pond. They can live up to 14 years or more. Like the common goldfish, this is a type that is inexpensive and easy to find. 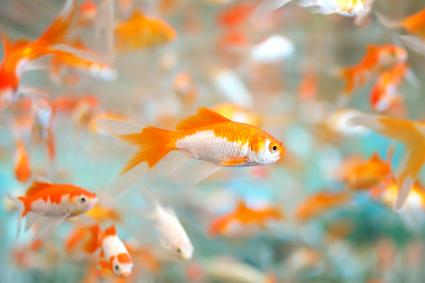 The name shubunkin means "red brocade" in Japanese. They are also often called "calico goldfish." Shubunkin goldfish tend to have calico-like coloring with mixes of black, gold/orange, red and white. They also come in a beautiful light blue color which is actually the base color for most of these fish. Many shubunkins have a "see through" look to them because their scales are actually clear despite the colors they come in. They have a long flowing single tail, flowing fins and a long body. They can live in both aquariums and ponds. In a pond, they can grow up to about 18 inches. 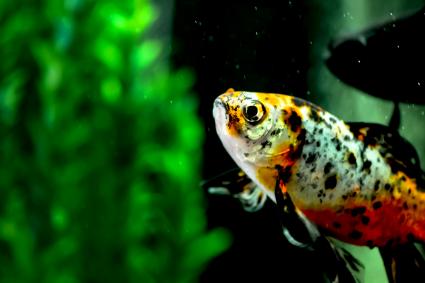 The fantail goldfish gets its name from its flowing long tail. It has a short and stocky body like the common goldfish and can grow to about six inches long. Fantails come in many common goldfish colors including orange, red, yellow, black, white and patterns. Fantails can do well in a pond, but they are more sensitive to the cold. They either need to come inside in the winter or have a pond with a warm enough area at the bottom to stay in during the cold months of the year. 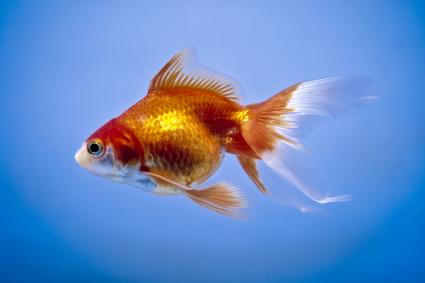 The Ryukin goldfish has an unusual shape that make it appear like a "hunchback." The fish has a large round body and fancy tail and dorsal fins. They can grow to about eight inches in length. They can have triple or quadruple tails making them an especially dramatic goldfish. They tend to come in white, calico, dark red, iron and red and white. Ryukins have a reputation for being aggressive to other fish, particularly shubunkin and comet goldfish. 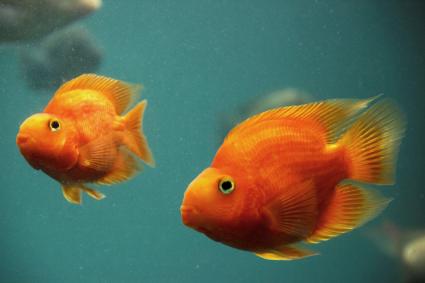 Certain breeds of goldfish do better in ponds than tanks, usually due to their size. While most of these can live in a tank, they'll grow to a larger size and live a longer life if kept in a well-maintained and filtered pond.

These goldfish have a bulbous formation on their heads that are called a "wen" by Japanese fishkeepers. This wen gets bigger as the fish grows older. A very popular type of oranda is the red cap oranda which has a bright to dark red wen on its head and body that can any other color such as orange or white. The red cap oranda is considered lucky by the Japanese. Orandas have bodies and fins like the fantail goldfish and they can grow as large as 12 inches. Orandas actually do better in ponds than aquariums because they're a large fish and they need an adequate size tank if kept inside. 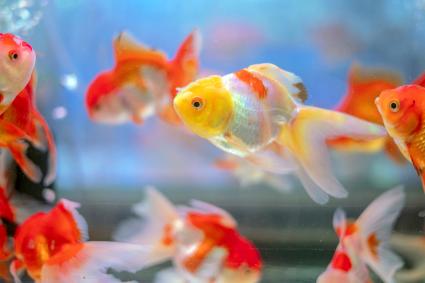 The lionhead looks similar to the oranda with its large dark red growth on its head. The name comes from the growth appearing like a lion's mane around the fish's head. They can grow up to 10 inches in length and they have an egg-shaped body, a fancy tail and no dorsal fin. They come in red, orange, black, calico and mixes of red and white or red and black. Lionheads can live in either a tank or a pond but they need a large fish tank to live a healthy life. 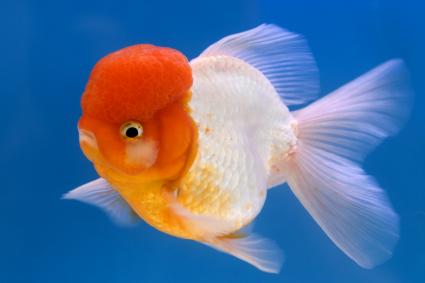 This type of goldfish does not have a dorsal fin, and it has a large egg-shaped body with a turned-down tail. Its head has growths on it similar to the oranda goldfish. They can grow up to 14 inches long and come in white, black, red, orange and orange and white. They have an unusual tail which is short but fans out to the sides. These fish are known for being interested in people and very intelligent. You can keep a ranchu in a tank or a pond, but due to their size, they are a better choice for ponds. 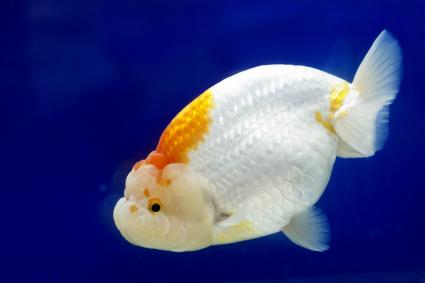 This is a newer type of goldfish that can do well in a pond or an aquarium. The wakin has the same body shape as the common but it has caudal fins that are fan shaped and they are known for their red and white markings throughout their bodies and fins. Wakin goldfish can grow up to 10 inches long and are a good choice for ponds due to their size. 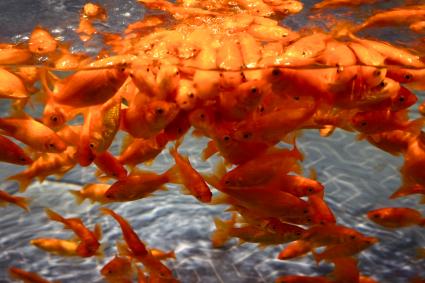 Types of Goldfish That Can Live Together

Different types of goldfish can do well together, while others can be a bad combination. In general, faster moving fish should not be paired with slower moving ones as they can cause those fish to starve.

Learning All About Goldfish Types

Goldfish come in an amazing variety of colors, shapes and sizes and not just the usual orange people usually envision. They are beautiful, relatively hardy fish that can grace any home aquarium or pond garden retreat. It's no wonder these fish have been popular for centuries!