Guinea pigs make wonderful pets because they're adorable, have charming personalities and don't require a ton of room. They are also far less prone to nipping than similar small pets like hamsters and gerbils. The American Cavy Breeders Association (ACBA) recognizes 13 different Guinea pig breeds, and one of these cuties just might steal your heart.

The Abyssinian's harsh-textured, medium-length coat grows in a series of evenly spaced rosettes which touch each other at the outer edges to create distinct ridges. The best examples of this breed have eight to ten rosettes, and any color or combination of colors is acceptable. The Abyssinian has a reputation for being one of the friendliest and affectionate breeds of Guinea pig although they can be very energetic and excitable for younger children. 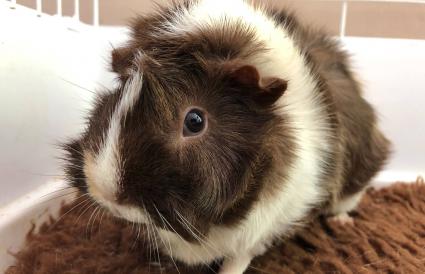 The Abyssinian satin is similar to the Abyssinian in almost every aspect. The one major difference is this breed's rough, medium-length coat has a beautiful satin sheen that practically sparkles in the sunlight. Abyssinian satin Guinea pigs are not as commonly found and shown as the regular Abyssinian version. As with the regular Abyssinian Guinea pig, the satin is known for being very friendly and outgoing. Satin breeds due to tend to be at risk of more health problems than the non-Satin version, such as osteodystrophy. 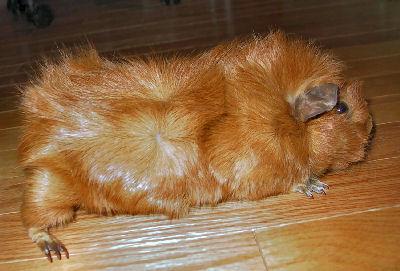 The American Guinea pig is one of the more common types of Guinea pigs you'll find at pet stores. It has a short, shiny coat that lays smooth without any rosettes (a whorl of hair that fans outward in all directions from a center point). All colors or color combinations are acceptable. The American Guinea pig requires minimal grooming, making it an easy first-time pet. They also are known for having a pleasant, friendly personality. 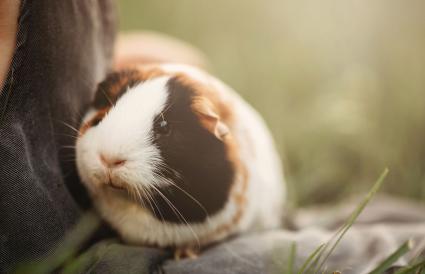 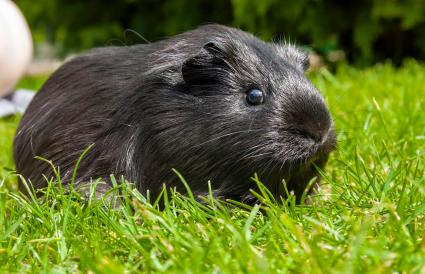 This newer Guinea pig breed has a long, silky coat with a single rosette in the middle of the forehead which is referred to as a coronet. This coronet grows long just like the rest of the coat, falling over the eyes in the front and blending with the rest of the coat in the back. Coronets are generally described as being affectionate and playful. Because their coat requires daily care, they may not be a good first-time owner choice. 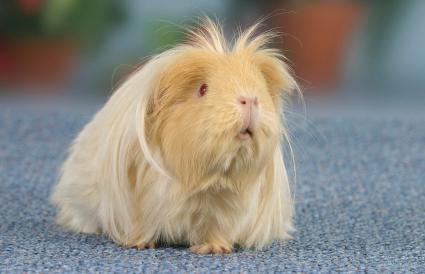 Peruvians have a long, silky coat which is quite thick. The hair grows in a series of rosettes which eventually become quite long and in fact can grow up to almost two feet in length. The hair eventually falls over the head in the front and sweeps outward on the sides and rear. When the coat reaches its full length, it's almost impossible to tell the head from the rear. The Peruvian requires much more grooming care than a short-coat Guinea pig. Peruvian Guinea pigs tend to be calmer than other breeds but have a curious, alert nature. Peruvians are not as common as other Guinea pig breeds as their hair does require more care to keep them properly. 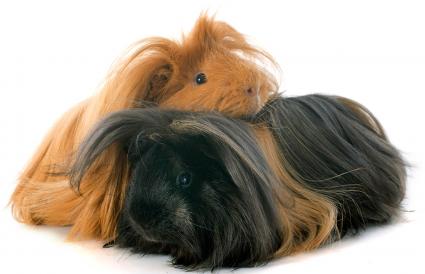 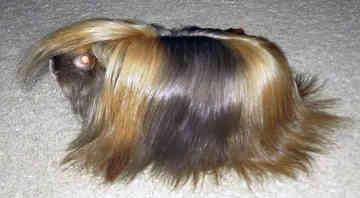 Of the long-haired Guinea pig breeds, silkies are the most popular. They are also known as shelties in the United Kingdom. Silkies have a long dense, luxurious coat which sweeps back from the forehead and grows quite long. They are similar to coronet Guinea pigs, except they don't have a rosette on their foreheads. Since they require more care than a short-coat Guinea pig, they're not a good choice for first-time owners or younger children. They are known for having generally docile, calm personalities and are considered the gentlest Guinea pig breed. They can also be shy at first and might not be a good choice for loud, active younger children. 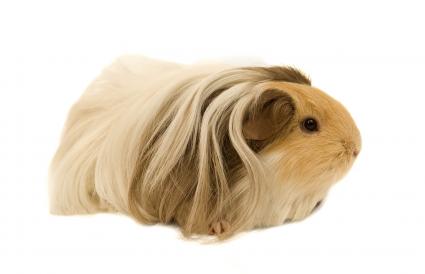 This breed is similar to the silkie. However, its long hair has extra sheen which sets all the satin-type breeds apart. As with other satin Guinea pig breeds, a silkie satin is at higher risk of diseases such as osteodystrophy. 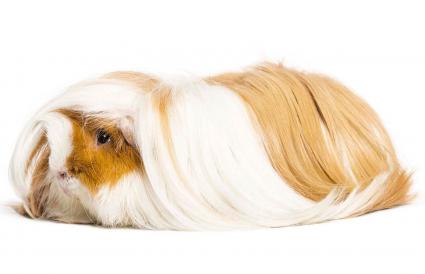 The teddy has a short to medium-length, even coat which is so full and wiry it stands on end and should spring back up when you run your hand over it. This breed comes in multiple colors and color combinations. They are also the only Guinea pig breed that has an upturned nose. Teddy Guinea pigs are very popular and are often thought of as the friendliest Guinea pig breed with people, although they can sometimes have issues with sharing a cage with another pig. Their coat does need regular brushing on a weekly basis. 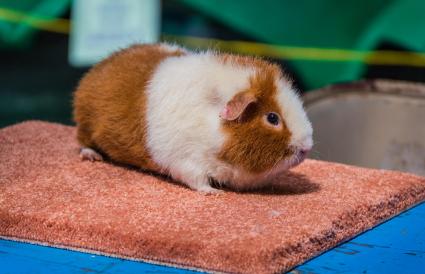 The main difference between a teddy satin and a teddy is the teddy satin's coat carries a sheen that appears to reflect light. The satin version of the teddy Guinea pig is very friendly and outgoing and it is the most popular of the satin breeds. Unfortunately, teddy satin Guinea pigs are also at higher risk of diseases like osteodystrophy. 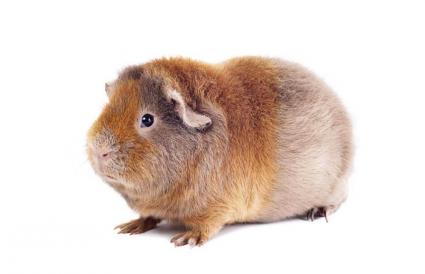 The Texel has a long, soft, springy coat which grows in ringlets. This curling can make the hair look a bit shorter than other long-coated breeds, but you can gently pull on a ringlet to reveal the true length. The hair on the face is short and gradually becomes longer at the top of the head to blend in with the rest of the coat over the shoulders. The fur on the belly should also be curly. Although it would seem like they need frequent grooming, this can actually be detrimental to the health of their coat. On the other hand, it's common for their coat to get tangled so extra caution needs to be taken to care for it. Texels are the most active of the long-haired Guinea pig breeds and also are thought to be one of the cuddliest. 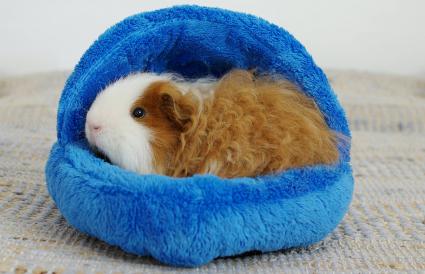 The white crested Guinea pig, or crested for short, has a short, smooth, silky coat just like the American. The difference is there's a single white rosette on this breed's head which is known as a "crest." The crest stands out from the color of the fur on the rest of the body. The crested Guinea pig is considered rare as they're not as easy to find as other breeds. The crested Guinea pig tends to be shyer than other Guinea pig breeds. Despite their quieter personalities, they are known for being quite smart and are a good choice for training tricks and other fun behaviors. 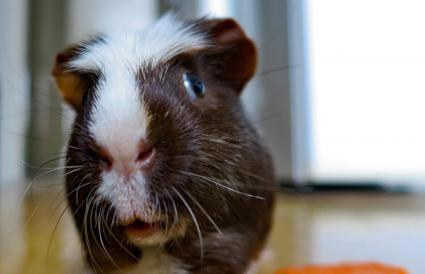 Although these breeds are not yet recognized by the ABRA, they are gaining in popularity among Guinea pig lovers. Some of these are not easily available in the United States but are popular in Europe, Australia and Latin America.

This rarer breed of Guinea pig gets its name from its alpaca-like fur, which is coarse and wavy. They are also known as the curly coronet, English Peruvian or the boucle Guinea pig. They are not a beginner breed as their coat requires daily care to keep it from getting matted and tangled. They also need a bath at least monthly. Alpaca Guinea pigs have a reputation for being very outgoing and affectionate. 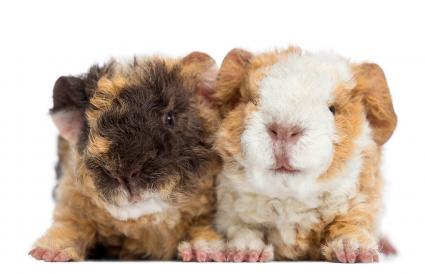 This unusual looking Guinea pig is hairless, although they are actually born with hair that falls out within a few months. These pigs come in many colors and have skin that needs careful monitoring. Because they lack a coat, they are at higher risk of getting skin infections, wounds and abrasions. They also need warm, soft bedding in their cages to help them maintain heat and keep them from hurting themselves. These Guinea pigs should not go out in direct sunlight and also cannot handle extreme temperatures. They also are similar to hairless cat breeds in that they have a higher metabolism and require a diet with higher energy needs. 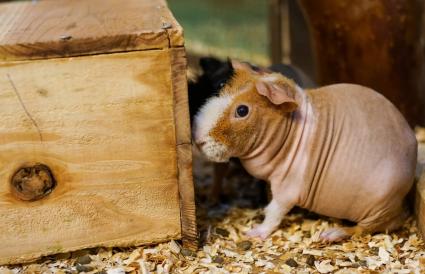 This Guinea pig breed gets its name from its coloring, which is similar to that of the Himalayan cat and Himalayan rabbit. They have a white coat all over their body and head with brown to black "points" on their ears, nose and the tips of their feet. They also have red eyes and are an albino breed, which means they are very sensitive to direct sunlight. Personality-wise, Himalayans are considered quite friendly and gentle but they are not a good beginner Guinea pig because their albinism requires special care. 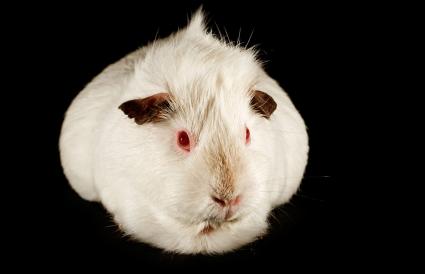 This Guinea Pig is affectionately known as "the lunk" and stand out for their very long, rough and curly coat. This breed is mostly found in Nordic countries such as Sweden, Norway and Finland. This is definitely not a beginner breed as their coat requires regular care. 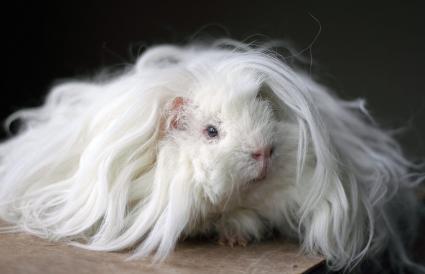 Merino Guinea pigs are similar to the Texel, but their coat is shorter on their heads. The breed is also known as the English merino or merino Peruvian. They also have a crest on their heads placed between their ears and eyes. They are considered gentle and friendly and make excellent pets. 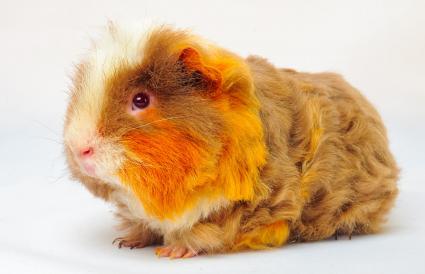 Like other types of rex animals such as rex cats and rex rabbits, this Guinea pig breed gets its name from its short, wooly coat. It also has long ears that droop downward unlike the ears of other breeds. Rex Guinea pigs are also the longest of all the breeds, reaching lengths of up to 17 inches. The rex tends to be a very affectionate, cuddly Guinea pig with an outgoing personality. Their coat does require some minimal grooming but they're not a high maintenance breed. 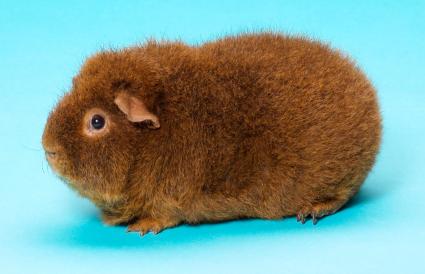 Also known as the sheba mini yak, this Guinea pig has a long, dense coat that appears somewhat out of control. These Guinea pigs needs daily grooming to keep their coat healthy. These Guinea pigs are known for being very intelligent, curious and docile and make lovely, if high maintenance, pets. The breed was created in Australia where it's known as the "bad hair day" cavy. 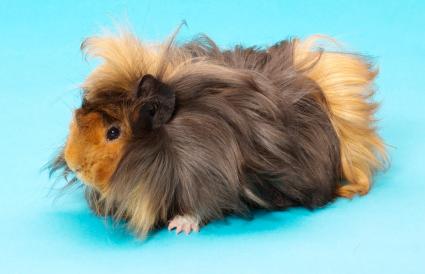 Similar in looks to the Baldwin, this is another hairless Guinea pig. They do have some hair on their bodies, around their feet, legs, back and around their nose. Like hairless breeds of cats, these Guinea pigs are susceptible to skin infections, irritations and damage because their lack of fur leaves the skin unprotected. You also need to be sure to have soft bedding material for them in their cages that won't hurt their skin, as well as be diligent about regular cage cleaning. Like the Baldwin, they also need a higher-energy diet due to their metabolism. 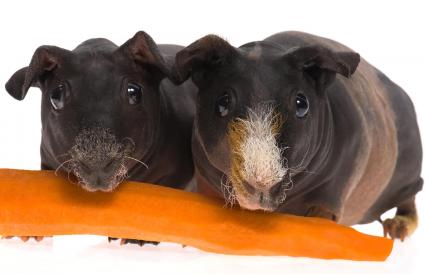 So Many Guinea Pig Breed Choices

You might find it difficult to pick just one Guinea pig with all these breeds and so many coat types and color choices to choose from. If you can't pick just one, realize these adorable animals are also social creatures and can be kept in small groups of the same gender in most cases. Start out with one from your favorite breed and then consider getting a friend to keep your pet company. Their playful antics will surely keep you entertained.

Comments
© 2006-2021 LoveToKnow, Corp., except where otherwise noted. All Rights Reserved.
Best Guinea Pig Breeds to Have as Pets