Lizards can make exciting pets, but with so many species available, it can be tough to choose which pet lizards will be right for you. Some of the most well-known lizards, such as iguanas, are poor choices for most pet owners. However, choosing the right pet lizard will help ensure that you and your pet are happy for many years to come.

Leopard Geckos Are One of the Best Pet Lizards for Beginners

These small lizards fit in your hand, even when fully grown, and are one of the most popular lizard pets and good beginner lizards. They make good pets because of their gentle demeanor, ease of care, and the availability of a multitude of interesting colors and patterns. Geckos are definitely cool lizards. 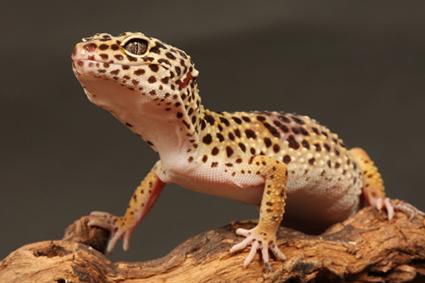 According to the Lake Eerie Nature and Science Center, a normal leopard gecko is yellow or lavender with brown to black spots, forming the pattern that led to this species being named after the spotted cat. Through captive breeding, a huge number of color variants are available. According to the herpetologists at VMSherp.com, some of these patterns include high yellow, pastel, yellow, patternless, albino, tangerine, eclipse, giant, Mack snow, enigma, hypo, carrot-tail, carrot-head, and many others. Leopard geckos have short claws and a fat tail which can break off if the lizard feels threatened.

Leopard geckos are nocturnal and are native to the deserts of Afghanistan, Pakistan, Iran, Iraq, and western India. They tolerate handling and even when provoked, rarely bite. Petco's Care Sheet for leopard geckos outlines their general housing requirements. One leopard gecko can fit within a 10 to 20-gallon glass aquarium. This can be lined with alfalfa-based pellets or calcium sand, however some geckos will ingest the substrate. A layer of paper towels or a repti-carpet is a safer alternative.

Two male geckos should not be kept together, but groups of a single male and one or several females are usually compatible. According to herp enthusiast and breeder Steve Sykes, leopard geckos require a hot environment, with a temperature range from 78 to 88°F, and a basking area of 90 to 95°F. Approximately 10 to 12 hours of light are recommended, but this does not need to be a UV source, as with many reptiles.

Leopard geckos are insectivores and are usually fed a mixture of crickets and mealworms. According to The Urban Gecko, juvenile leopard geckos should be fed every day, while adults require food three times a week. Other food sources, such as silkworms, waxworms, or pinkie mice, can be fed on occasion. All insects should be dusted with a calcium or vitamin powder or gut-loaded with fresh greens, high-quality dog or cat food, or a commercial mix. Fresh water should always be available.

Bearded dragons are medium-sized lizards that are hardy and easy to care for. They make great pets because they tolerate daily handing, rarely show any aggression toward humans, and even become affectionate with their owners. 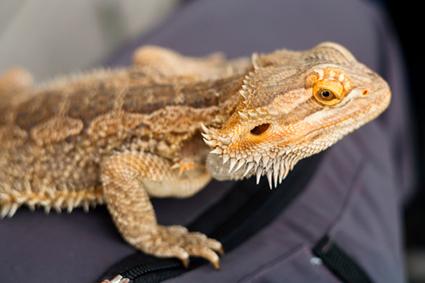 Bearded dragons grow to be 13 to 24 inches in length. This species is native to the central regions of Australia, inhabiting deserts, savannahs, or woodlands. Bearded dragons are dull brown to tan, sometimes with red or gold highlights. Their bodies are flattened, and their name comes from the ruff of spikes found around their neck.

The housing requirements for bearded dragons are similar to those for leopard geckos, except that a larger amount of space is needed. Male dragons should not be kept together. The temperature should range from 70°F to a hot spot of 100°F. Bearded dragons should be misted with water daily, and can be bathed a few times a week. According to herp enthusiast Jeremiah "Podunk" Jaeger, bearded dragons require full-spectrum lighting for 12 to 14 hours a day. UVB light is essential to their metabolism.

Bearded dragons are omnivores, and they eat a diet of crickets, worms, pinky mice, leafy greens, and squash. Baby dragons should be fed insects every day, while adults should be fed two to three times a week. You can also offer salad greens mixed with small pieces of carrot or sweet potato. Each meal should be dusted with a multivitamin or mineral supplement.

This species of gecko was thought to be extinct until it was rediscovered in 1994. Thanks to captive breeding, these unique lizards are now plentiful from pet stores and breeders. They make great beginner lizards pets because they can be kept at room temperature and have a striking appearance and multiple color patterns. 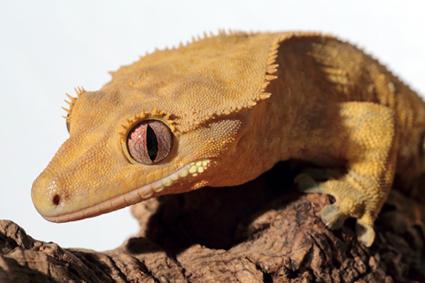 According to Reptiles Magazine, crested geckos are small lizards and reach four to eight inches in length, with males being larger. They are native to New Caledonia, a group of islands in the South Pacific. Crested geckos have also been called eyelash geckos, after the frill of eyelash-like projections over their eyes and along their sides. According to the book Crested Geckos and Relatives: Reptile and Amphibian Keeper's Guide, each toe of the crested gecko, as well as the underside of the tail, is covered with small hairs called setae. These allow them to grip smooth surfaces and climb.

Habits and Housing for Your Crested Gecko

Crested geckos need a tall aquarium filled with branches for climbing, but also with numerous hiding places. The cage should be misted to keep humidity at greater than 50 percent. Crested geckos can be kept at room temperature and can tolerate mild temperature fluctuations. Avoid extreme heat or cold. The bottom of the aquarium should be covered with a natural substrate such as coconut fiber, dampened sphagnum moss, or bark. UVB light is not required for this species.

Similar to other lizards, crested geckos eat insects such as crickets, mealworms, and waxworms. LLL Reptile notes that you can also feed them baby food and over-ripened fruit. A calcium supplement and a multivitamin powder should be dusted on the food as with other species.

Some people choose skinks as pets. Blue-tongued skinks are medium lizards, reaching 18 to 24 inches in length. According to herp enthusiast Zach Griffith, blue-tongued skinks make great pets because they are intelligent, tolerate handling, and live longer than most lizards, potentially up to 30 years in captivity. 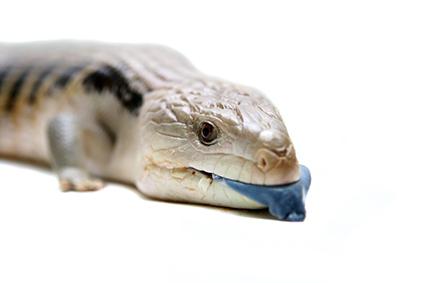 Size and Colors of a Blue Tongued Skink

Blue-tongued skinks are native to Australia and eastern Indonesia. They are diurnal with a flat body and short legs and tail. Their scales are silver-gray to brown, and they are marked with brown bands over their body and tail. The blue-tongued skink gets its name from the distinctive, thick blue tongue.

Baby blue-tongued skinks can start out in a 20-gallon aquarium. As they grow, Reptiles Magazine recommends a larger enclosure with at least a 36 by 18-inch footprint. Blue-tongues should be kept separately for the beginning herp caretaker, and males should never be housed together. The temperature should range from 75 to 82°F at the cool end of the enclosure, to a basking area of 90 to 100°F. Line the bottom of the cage with bark, mulch, or recycled paper. Structures for climbing are not necessary. A source of UVB light is recommended.

Also known as the Carolina anole or the American chameleon, these lizards are small and quick. They do not usually adjust to being handled, but make good pets because they change colors and are active and interesting. 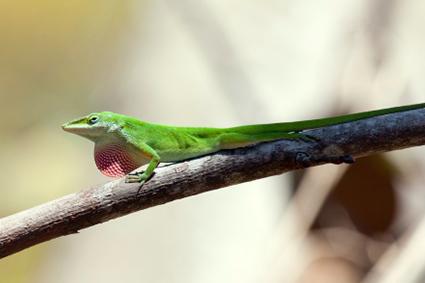 Anoles are small, only reaching five to eight inches when fully grown, according to Reptile Magazine. Their bodies are thin, and they can change colors from brown to different shades of green, depending upon temperature, stress, and other environmental and behavioral factors.

Habits and Housing of Green Anoles

Anoles can be kept in a glass aquarium at a daytime temperature ranging from 77 to 86°F. This can drop to 65°F at night. Anoles require 12 to 14 hours of light, as well as a source of UVB light. The bottom of the enclosure can be covered with damp sphagnum or peat moss, or a layer of potting soil covered with bark mulch. As with many lizards don't keep two males together. Sticks and other climbing structures should be provided. Mist the enclosure two to three times a day.

Green anoles eat insects and can be maintained on crickets, small cockroaches, flies, waxworms, fruit flies, and other small insects. Avoid potato bugs, pill bugs, and beetles. All food items should be either gut-loaded or dusted with calcium or vitamin powder. Anoles drink the water droplets off the leaves in their environment.

Fat-tailed geckos are closely related to leopard geckos, but are native to West Africa. They make good pets because they have docile dispositions and move more slowly when being handled. 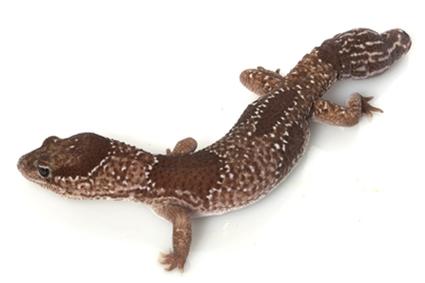 Fat-tailed geckos can be housed at 80 to 90°F in a small aquarium or terrarium. This species does not climb very much, so the height of the enclosure is not a concern. Humidity should be kept at 50 to 70 percent, and the substrate should be something that retains moisture, such as a mixture of cocoa husk, peat moss, and a little sand. African fat-tailed geckos will burrow into this moistened substrate.

Fat-tailed geckos are nocturnal. They do not require a UVB light, and should even be kept out of direct sun. These geckos generally don't make quick movements, and may be more suitable for children to handle.

Fat-tailed geckos can be fed just like leopard geckos. Their diet should consist of mealworms, silkworms, crickets, or locusts. All food items should be dusted with a calcium or vitamin powder. Baby fat-tailed geckos should be fed every day, and adults can eat two to three times a week.

Argentine Black and White Tegu Have a Good Temperament

The Argentine Black and White Tegu is native to the rainforest and savannahs of South America. They make good pets because of their high intelligence and good temperament, in some cases even seeking out human attention or becoming attached to their owners. 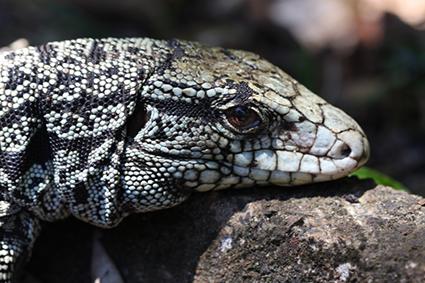 The most important thing to know about tegus is that they grow quickly and reach four to five feet in length. These are large lizards. According to Branson's Wild World, the black and white tegu is patterned with black and white stripes and has a beaded appearance to its skin.

Habits and Housing for Tegus

A baby tegu can start out in a 40-gallon aquarium. However, by the time the lizard reaches a year of age, it will need a custom-built cage. This should be at least six by three feet in dimension, with a height of three to four feet. The enclosure needs to be cool (75 to 85°F) on one end, with a basking area of 95 to 110°F on the opposite side. There are several types of mulch bedding available to cover the bottom of the enclosure. A source of UVB light or natural sunlight is required.

Tegus are carnivorous lizards, but can also eat a little fruit. Tegus should be fed a variety of meat items, including frozen, thawed mice or rats, ground turkey, chicken gizzards, or fish. Smaller tegus will enjoy insects such as crickets, super worms, mealworms, or roaches. Small amounts of berries, papaya, mango, pears, or apples can also be fed. A calcium or vitamin supplement should be used to dust the insects.

Lizards are fascinating and beautiful pets. With so many species to choose from, it should be easy to find a lizard that will make a good pet for anyone's needs.