There's no shortage of good bearded dragon names. Get dozens of cute name ideas for your pet based on its personality, looks, color, or even choose a fun theme name.

Bearded dragons make excellent pets. They have an even temperament, and some bond closely with their owners. They also have some unique behaviors that can help you come up with a name. For example, these lizards are known to sit still with their mouths hanging open. The action is to help them stay cool, but the behavior lends itself to a name like Dopey or Slobbers. They also tend to sway on their legs to communicate with other lizards. In groups, they form a hierarchy where the largest lizard is the leader. Here are some name ideas based on the personality and behavior traits of bearded dragons:

Good Names for Dragons Based on Appearance

Bearded dragons have a definite unique look. From the physical features, such as looking like they have a beard to the various colors and special features an individual dragon might have, you'll find inspiration for any number of fun names.

According to Animal Planet, the Pogona, which is the most common bearded dragon to have as a pet, ranges from tan to yellow in color. Breeders have even managed to create some strains with reds, violets, and pale orange. However, this dragon also has the ability to change colors like a chameleon.

Names for Bearded Dragons Based on Size

There are many choices when it comes to Australian names for your bearded dragon. You could choose a famous Australian, a place of interest, cultural items or even an Aboriginal name.

Of course, you can also name your pet a cute dragon name based solely on its beard. 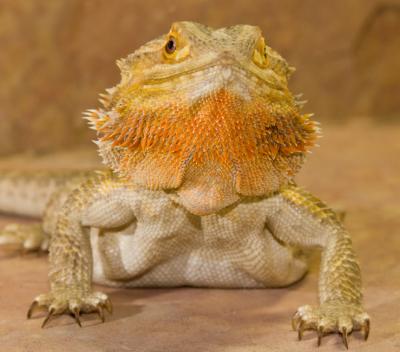 If you haven't found a name yet that suits your fancy, you might want to consider some other categories and see what you can come up with. Some themes to look at might include:

Don't Rush to Choose a Name for Your Bearded Dragon

Bearded dragons can live as long as 12 years. Take your time and choose a name you're going to love calling your pet for the next decade.

Comments
© 2006-2021 LoveToKnow, Corp., except where otherwise noted. All Rights Reserved.
What Should I Name My Bearded Dragon?