Although it may concern you as a first-time turtle owner, it's actually normal for a turtle to not eat for a few days. If he or she has stopped eating for several days, it's time to look at what's going on his environment to see if there's a problem.

Reasons for a Turtle's Lack of Appetite

Before you attempt to coax your turtle to eat, it's important to figure out why he's not eating. Changes in his environment, feeding schedule and diet can all be possible causes.

If you've just brought your new turtle home, he may be very stressed at all the changes in his environment. If you have been handling your turtle a lot, this may also cause stress. Aquarium setup and maintenance expert Austin Weber of Lucky Pup Adventures says, "turtles are not a creature that, in their ideal world, you are handling them every day. If you want a turtle that is ok with more handling, tortoises are a better choice. Aquatic turtles are not keen on being touched a lot." Weber also said stress can come from poor water quality and poor lighting. 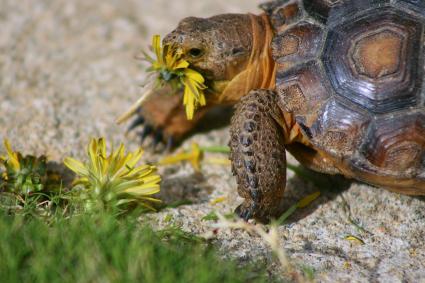 Since turtles require their environments to be a certain temperature, if your aquarium is not warm enough this can dampen his appetite. Like many reptiles, a turtle should have areas of his tank with different temperatures that he can move about in as he pleases. The proper temperature varies depending on the species of turtle. For example:

Just as with temperature, it's important to provide species-appropriate lighting in your turtle's enclosure. Most types of pet turtle species require about 12 to 14 hours of light each day followed by a night cycle of about 10 to 12 hours. Weber notes that turtles need UVB lighting to process nutrients properly and the lack of it can make them lethargic and lose their appetite.

The first thing you should do is look over your turtle for signs of illness. Some common symptoms of sickness are:

It's possible your turtle isn't eating because of his diet. Weber suggests turtle owners, "Try and vary their diet. You can try something different to stimulate their appetite." If you've fed him primarily a commercially prepared turtle diet, he may do better eating live food like crickets, snails, mealworms and earthworms. Some turtles will even eat small feeder mice or feeder fish. Some other changes you can make to his diet to help him eat include: 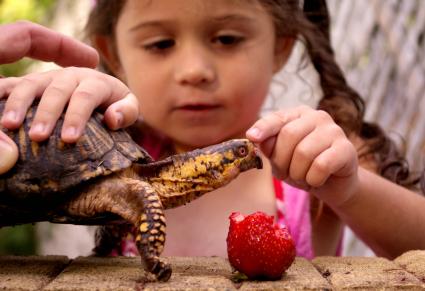 Some species of turtles do better eating their meals under water. You can experiment with putting his food in the watery area of his tank to see if this sparks his appetite. Another way to use water to entice your turtle to eat is to fill a spray bottle and gently mist him. The reason for this is turtles instinctually will try to eat when it's raining because in the wild they know this is when worms are more easily accessible.

Another dietary issue that can affect your turtle's appetite is not getting enough calcium. If your turtle isn't getting a calcium supplement in addition to his regular diet, you can provide him with one through a weekly sprinkling of calcium powder on his food. Cuttlebones and calcium blocks in his tank are also good options.

Turtles tend to have better appetites when they're most active which is either early in the day or later in the afternoon. If you've been feeding him midday or in the evenings when he's more sluggish, try changing the time of day to see if this stimulates his appetite. The closer you can feed him to the start of the day at dawn, the better, though this will mean some early morning alarm-setting for you! Adult turtles also do not need to eat every day, so it's possible he simply isn't hungry if you're giving him food daily instead of every other day.

Some turtles will attempt to hibernate in the fall and during the winter. If you can find nothing wrong with your turtle's health, discuss the possibility that he is trying to hibernate with your veterinarian. Hibernation may not be recommended by your veterinarian as it can cause additional medical issues for your turtle. Even if your turtle doesn't fully hibernate in the winter, Weber says it's normal for them to eat less and be less active at this time of year.

Time for the Veterinarian

If you are able to figure out what the cause behind your turtle's lack of appetite and make simple adjustments to his tank environment or diet, you hopefully should be back on track with feeding him regularly. If your turtle hasn't eaten in a week or if you notice signs of illness coupled with lack of appetite sooner than a week's passing, it's time to get your turtle to a reptile veterinarian. Although a turtle can actually go without food for weeks but you don't want to delay getting him treatment if the cause is an underlying medical problem.

0
Comments
© 2006-2020 LoveToKnow, Corp., except where otherwise noted. All Rights Reserved.
Reasons Why My Turtle Isn't Eating