Mud turtles are small, omnivorous turtles that prefer sandy, wet and muddy areas to live. They also make excellent pets, easily kept both indoors and out.

While mud turtles are found in the wild, there are four distinct species of mud turtle that are frequently kept as pets. 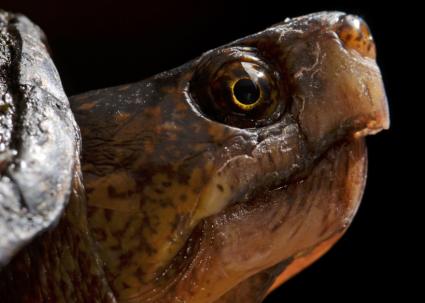 The Mississippi mud turtle shares many of the same characteristics of the Eastern mud turtle. They grow to a similar size and have similar coloring and features including size, color and shape of the shell. 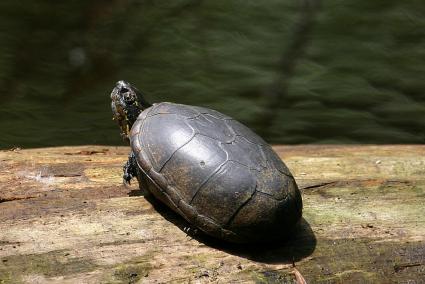 What differentiates the Mississippi mud turtle are two, light colored lines on either side of the turtle's head. The lines extend from the tip of the head, back toward the shell before stopping. They may be thin or thick and can range in color from pale yellow to a deeper tan that is difficult to see.

The Striped mud turtle is one of the easiest of the species to recognize. It is generally smaller than the other mud turtles, rarely growing larger than 3 to 4 inches in size. While the overall coloring and shape of the shell of the striped mud turtle is similar to the others, it is distinguished by three, light colored stripes running vertically along its shell as well as a single stripe between its eyes. The stripes may be yellow, tan or gold in color, and there may also be a coordinating stripe that rings the shell at the edge dividing the top and bottom. 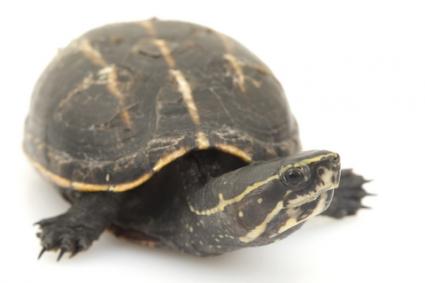 The yellow mud turtle has a similarly colored shell of dark, olive brown to the other mud turtles, as well as similar characteristics. It differs and is distinguished from the others by yellow coloring on its head, throat, and sides of neck. This color may extend from the shell, along the sides of the neck and up under the chin, leaving the top of the head a darker color, or it may encompass the entire head. In some turtles, the yellow is less pronounced, appearing more as two thick stripes of color on the turtle's neck. The yellow mud turtle grows roughly 3 - 4 inches in size. 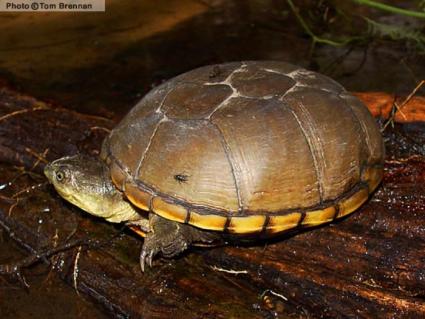 While the four sub-species of mud turtles each have their distinguishing characteristics, they are essentially the same in many ways.

Mud turtles can live up to 50 years with proper diet and care. Turtles that are kept outdoors do hibernate in the winter, burrowing themselves deep into the mud to stay warm.

The male mud turtle is generally larger than the female, with a larger head, legs, and tail. The tail of all male mud turtles comes to a bony spine at the end, while the female's does not. The male also has rough, scaly patches on the insides of his legs.

What Do Mud Turtles Eat?

In the wild, mud turtles live on fish, flies, and vegetation. In captivity, they can be fed standard turtle food, however, a varied diet of plenty of greens or small fish will help them live healthier lives. Mud turtles, like many aquatic turtles, prefer to eat in the water. This can, however, lead to bacterial growth in their habitat. Feed the turtles in a small plastic container near their water to help cut down on the mess in their tank. Feed the mud turtles 2 to 3 times a week, and provide plenty of calcium supplements and Vitamin D3 if kept indoors.

Keep mud turtles in a large tank with a sandy, dry area for rest and plenty of clean water. Your turtle should take up no more than 25 percent of the size of the tank's floor. If you keep your mud turtle outdoors, provide a large, shaded area with plenty of mud to accommodate their hibernation routine. Turtles kept outdoors require enough water to keep them comfortable in all climate temperatures; deep water will stay cooler in hot weather and will hold warmth in cooler weather. Provide a basking light above their rest area if kept indoors; mud turtles enjoy laying directly in sunlight.

The temperature in the tank should be kept at 80 degrees when the turtles are not hibernating, while the water is kept at 70 degrees. If the turtles are indoors, make sure the basking light provides 90 degree temperatures, as well as a UVB spectrum to help them generate Vitamin D3. Like all turtles, mud turtles require plenty of sunlight or full spectrum light to keep them healthy; if they do not get enough their shells become soft bendable, which may lead to illness or death.

Mud turtles are fairly low maintenance pets that don't require a great deal of interaction from their owners. They rarely grow larger than 5 inches, making them ideal for most homes. Give mud turtles a look if you are considering bringing a turtle into your home.