Reptiles are not necessarily thought of as "intelligent" when compared to more common pets like dogs and cats. Some of this may be due to reptiles having different types of personalities and levels of affection with humans unlike animals that are more social with humans. However, this doesn't mean that reptiles are not smart or cannot learn to perform behaviors.

For a long time, there was little in the way of serious research into reptile cognition. Dr. Jennifer Coates, DVM, who serves on the advisory board for Pet Life Today, states that, "The intelligence of reptiles has not been well-studied, probably because it has simply been assumed that because they are rather 'primitive,' they simply can't be all that smart. But our understanding of reptile intelligence is starting to change."

Reptiles were long thought of as having a primitive, or "reptile brain" that was focused primarily on surviving. The model of the brain developed by neuroscientist Paul MacLean held that people have three brains that worked separately and together: A "reptilian brain" that focused on basic fight-or-flight behaviors, a limbic system which focused on emotion and memory, and the neocortex which was the center of reason and conscious deliberation. However, the more we learn about reptiles, the more we begin to understand that the concept of the "reptile brain" for both humans and reptiles doesn't work. Reptiles are not simply "input output" machines that are purely survival-focused. They have been shown to have complex social behavior including raising their young, engaging in play, and cooperating with others of their species.

There have been several studies that provide fascinating insight into the intelligence of reptiles. Dr. Coates cites one study where anoles demonstrated a surprising ability to problem solve and gain access to food, even when presented with a challenge that was significantly different from one that they had previously experienced." She reports on other studies that have shown that, "corn snakes and side-blotched lizards can learn and remember how to efficiently find their way to shelter within a maze." One study at the University of Lincoln in England found that a tortoise could find its way through a maze using not only memory but also an ability to adapt her navigational strategy when factors like darkness were entered into the experiment. While some of these species are not typically kept as pets, Dr. Coates believes, "It's quite likely that similar forms of intelligence are present in other reptile species." 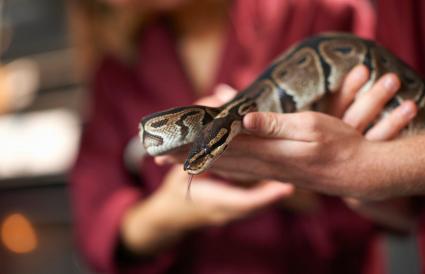 One of the reasons that reptiles are not often thought of as intelligent by pet owners is that many haven't been given the chance to demonstrate it. The more you provide a reptile with mental and physical enrichment in their habitats, as well as attempt to train behaviors, the more chances you'll have to see examples of reptile intelligence in action.

Reptiles can recognize their owners, although the degree to which they do can vary with species. It also can depend heavily on how much you interact with and handle your reptile. Veterinarian Dr. Sara Ochoa notes that pet reptiles, "learn where the food is coming from and not to bite the person that feeds them. Some of them know who in the house is always giving them food and will move from one side of the cage to another." This behavior has also been demonstrated in zoos where reptiles clearly recognize people who handle and feed them regularly. Some reptiles, such as iguanas and tortoises, are known to show preferences for certain people over others. 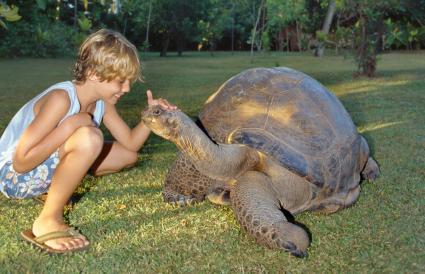 Reptiles cannot necessarily recognize their name as a spoken word in the way that a dog or cat can. You may notice a lizard coming toward you when you call their name, but there's a more likely chance this is because the lizard is associating your presence with things that it wants, such as food. The more social the lizard, the more likely it will be that they respond to your voice and presence. Bearded dragons are a good example of a friendly lizard that appears to gravitate toward human interaction and can be trained to respond to your voice. Whether they actually know a sound is their name is unclear.

Can Reptiles Come When Called?

Lizards can learn to come to you though your success with teaching this behavior will vary with the type of lizard and its comfort level with you. It also will depend on their environment at the time. For example, a snake basking in a cage may not feel motivated to come to you if they're comfortable and not hungry. Since some reptiles don't eat as often, it can be harder to coax them to come if they're not ready to eat. They also may not come to you if there are strangers in the room. Animal trainer Linda Brodzik has trained her tortoises to come using a vibration as the cue. However, she notes that they will not come over if a stranger is there and they will even "shell up" if they feel nervous. Dr. Ochoa reports as well that, "My tortoise will come to me when called. It can take him a few minutes to get to be, but when he is playing in my backyard, he will come to me if I call him." 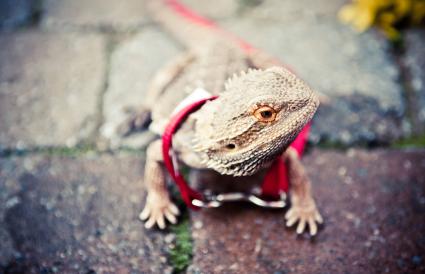 The types of behaviors you can train a reptile to do will largely depend on the type of species and their individual temperament. Lizards, snakes and turtles are commonly trained to learn many husbandry behaviors in zoos. This is done through pairing the behavior with something they want, usually food, and with clicker and target training. Relates Dr. Coates, "Reptiles in zoos and other facilities are commonly trained to be more receptive to the handling and procedures needed for their well-being using techniques like positive reinforcement that are commonly used to train mammals and birds."

What Can You Train a Pet Reptile to Do?

Examples of behaviors that pet reptiles have been trained to do include teaching bearded dragons to walk on leash or getting snakes to understand a specific visual or physical signal that indicates food is coming. Most behaviors that reptile owners teach tend to focus more on handling behaviors to make caring for their pets easier and reduce their chances of being bitten. Skilled animal trainers can accomplish more such as with Linda Brodzik who has taught her tortoises Dewberry and Darwin to follow a target, "high five," detect scents, go to their kennel and discern between different colors.

The more we learn about reptiles and their cognitive abilities, the more fascinating they become. Reptiles can demonstrate intelligence and some can learn some complex behaviors. They also can benefit greatly from enrichment. Consider adding more ways for them to work to get their food, such as floating turtle feeders and or encasing insects in jars they need to open. Spend some time learning about how your lizard exists in the wild to come up with ways to get their brains active and you may be surprised to see what they can do!