The crested gecko is an interesting species of gecko that comes from New Caledonia, a cluster of islands located off of the coast of Australia. Once thought to be extinct, this intriguing reptile is gaining mass popularity as people are learning all that they can about crested gecko facts.

They Have Special Toes

The crested gecko has an adaptation that allows it to do something quite incredible. Their tiny toes have specialized pads on them, which allow it to move in a vertical direction up and down surfaces. If the crested gecko was a superhero, it would be Spiderman. 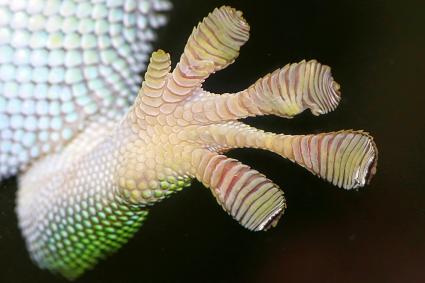 Crested Geckos Come in a Multitude of Colors and Patterns

The crested gecko comes in a wide array of solid colors and patterns. Some gecko colors occur naturally in nature, while other, more complex patterns, like the pinstripe, harlequin, and dalmatian patterns have been developed over time by breeders.

A Lost Tail Is Gone Forever

Tail regeneration is typical of many lizards. If they lose their backend, they are often able to regrow that part of their body. The crested gecko lacks the ability to replace its tail should it be lost to them. Once the tail is gone, it is gone for good.

The crested gecko is a super skin shedder. When the animal is young, they discard their skin coverings roughly once per week. As they get older, this behavior dwindles and by the time the gecko is fully grown, it only sheds its skin once a month or even once every other month.

Crested geckos are double-jointed creatures. Their double-jointed toes allow for them to lift up from surfaces that they are standing on with their toes curled upwards.

They Don't Have Eyelids

The crested gecko does not have eyelids to shield its eyes when need be. When this popular reptile needs to moisten its eyelids, it will lick its eyes and give them a bit of a rinse. This behavior also helps the crested gecko remove dust and debris from its vision. 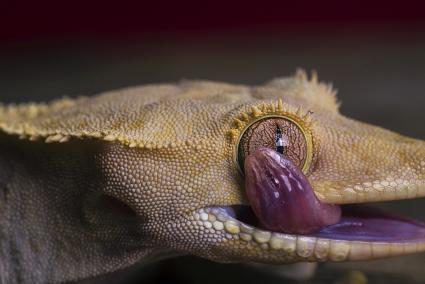 These creatures are truly unique. Learn more about them with these fun facts about crested geckos.

They Were Believed Extinct

The crested gecko was thought to be extinct up until the 1990s. It was only then that large numbers of the reptile were found to be comfortably living on the islands of New Caledonia, off of the coast of Australia.

No Two Are the Same

No two crested geckos are exactly alike. Their colors and patterns are varied, some ever so slightly, giving each one of these unique reptiles a bit of its own spin.

They Have a Nick Name

While many reptile lovers refer to these animals as crested geckos, they are also called eyelash geckos. They have the appearance of long, lush eyelashes, but in truth, they have no eyelashes to even speak of. The "eyelash" looking component to their bodies is actually ridges, not lashes. 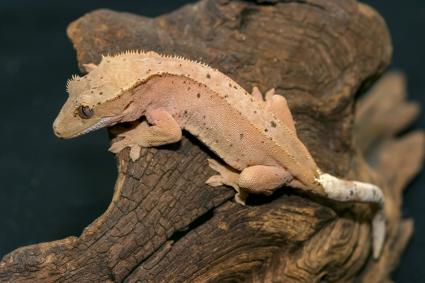 They Live a Long Time

The crested gecko lives a pretty long time for such a little guy. Their lifespan ranges between 10 and 20 years, depending on their care, environment, and possible predators.

Crested geckos have been known to make noises from time to time. During their breeding season, they will often chirp to communicate with other geckos. The crested gecko also makes a barking sound on occasion, but this sound typically signifies some level of distress in the animal.

The Crested Gecko Can Get Fired Up

Crested geckos can change color depending on their mood and environment. The ability to do this is often referred to as being "fired up." Being fired up doesn't necessarily signify distress. It can mean a general change in alertness or be a communication response between geckos. When the gecko is sleeping, it is often referred to as being "fired down" and will then change its color to a darker hue.

They're Big for Geckos

While many people think of the crested gecko as a tiny creature, they are actually big dogs in the gecko world. When it comes to species of geckos, the crested gecko is one of the largest gecko species on the planet. They reach a length of 5 to 8 inches in adulthood, more than twice the size of smaller gecko species, which are as small about half an inch in length during adulthood. 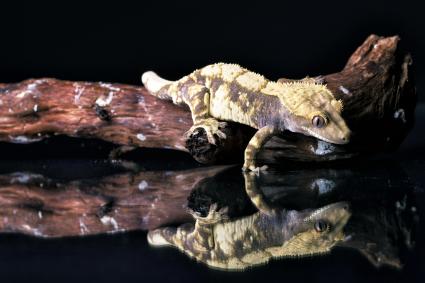 The crested gecko is nocturnal and will be more active during the evening hours. In the wild, they typically hunt and feast under the cover of night and snooze away the day. Their nocturnal behavior is something to consider when housing a gecko in captivity. You may not want to keep it in your bedroom if you value your sleep.

This beloved little lizard is now one of the more popular reptiles to own. While they can live out long lives away from their natural habitats, it is always important to consider the gecko's nutritional and habitual needs if it is to survive. Prior to owning any exotic pet, prospective owners should ensure that they have the necessary supplies, finances, and the time to devote to a particular animal as well as any veterinarian care for an animal that finds itself in need of medical treatment.