Chameleons are one of the most well-known lizards on the planet, even by people not familiar with lizards. After all, their very name led to a word that means a person who can change their looks or personality to fit a situation.

These fascinating reptiles are interesting for more than just their color-changing abilities.

1. There are Many Types of Chameleons Around the World

There are over 150 species of chameleons internationally. They are known as "old world" lizards because they are found in the African, Asian and European continents. Most can be found throughout Africa, the Middle East, with the island country of Madagascar home to over 50% of the world's chameleons. A few species are native to India, Pakistan and Sri Lanka and the Indian Ocean region. The common or Mediterranean chameleon can be found in southern Europe including Cypress, Crete, Portugal and Spain and the Mediterranean Sea region as well as parts of southwest Asia including Iraq, Lebanon, Saudi Arabia and Syria.

2. Only a Few Species of Chameleons are Pets

Although there's a wide variety of chameleon species, the majority of chameleons in the pet trade are from three species. The panther chameleon, veiled chameleon, and Jackson's chameleon are the ones most commonly kept as pets. 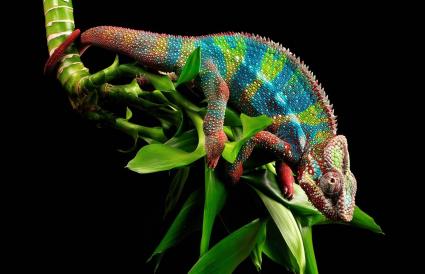 3. The American Chameleon Is Not a Chameleon

Although it's referred to as the American chameleon, the anole is not in fact a member of the chameleon family. This lizard is related to the iguana instead. It gets its name from the fact that it can change color like chameleons.

4. Chameleons Have Existed a Long Time

Chameleons make their homes in trees and bushes. Their homes range from rainforests to mountains to grasslands to deserts. Though most live in trees, a few are known to live closer to the ground in tall grass formations and in piles of leaves and branches dropped from trees and in sand dunes. 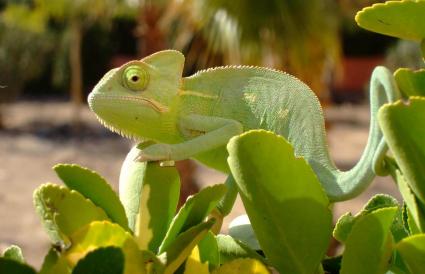 The name chameleon comes from ancient Greek and Latin and means "ground lion" or "lion on the ground." Since chameleons live in trees, it is thought that perhaps the name refers to their ornate mane-shaped crests around the heads of some species.

Although not all chameleons possess this trait, many have prehensile tails. These tails curl around branches and allow them to keep their balance and climb trees. Unlike other lizards, a chameleon's tail will not grow back if broken off. 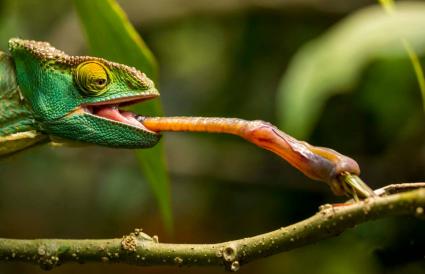 9. Chameleons Can Change Their Colors

Chameleons can change their colors to adapt to their environment, though this ability differs across species. While it's commonly thought that they match their skin color to match their surroundings, they can only do this in certain circumstances and they cannot match complex colors or patterns such as those found on printed clothing. Each species has their own unique range of colors that they can cycle through. Chameleons change their colors for a number of reasons including:

10. Male and Female Chameleons Are Different

Male chameleons tend to have horns, spikes and crests around their heads whereas the females do not. The males also tend to show off more brightly colored patterns, which usually occurs during mating time, to impress the females. Most pet chameleons tend to be males because they have more ornamentation on their bodies.

Each of a chameleon's bulging eyes can move in two different directions independent of the other. This allows them to see in an almost 360 range around them. It also allows them to keep their attention on two different things simultaneously. Their sight is so good that they can see insects as far away as 20 feet. In addition to their amazing physical range of their vision, they also can see in the ultraviolet light spectrum. 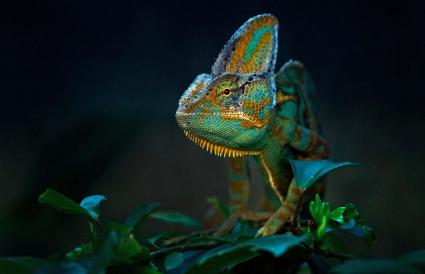 12. Chameleons Use Their Tongues to Hunt

Chameleons have very long tongues that they can eject quickly from their jaws to catch prey. Their tongues move so fast that they can hit an insect in 0.07 seconds and their tongue's acceleration has been measured at approximately 41 g's of force. Scientists have found that the smaller the species, the faster the speed and stronger the force of their tongue's acceleration. The length of the tongue varies by species but can be up to twice as long as their bodies. The tongues have a sticky, bulbous end that has a "suction cup" effect on insects that will get caught on it. The chameleon can then pull the trapped insect inside their jaws.

Chameleons have tiny holes on the sides of their head that are their "ears." The ear holes are so small that they are impossible to see to the naked eye. As a result they do not hear very well and rely on sensing vibration and certain tones to perceive their environment, along with their excellent eyesight.

14. Chameleons Come in Many Sizes

Ectotherms are creatures whose body temperature is controlled by the environment around them. They need to heat their bodies from outside sources, such as a heat lamp if kept in a terrarium or the sun in their natural environment. If an ectotherm becomes too cold they become sluggish, will stop hunting and cannot digest food.

The chameleon's diet consists of insects such as crickets, locusts, mantids, stick bugs, snails, worms and grasshoppers. Larger chameleon species have also been known to eat other lizards and small birds. Chameleons can also eat fruits, berries, leaves and plant matter. A few chameleon species are only carnivorous, or insectivores, while others are only herbivores.

Chameleons are not a dangerous lizard, but they can hiss and bite if they feel threatened. Some chameleons dislike being handled by humans and can find it very stressful. On the other hand, there are some pet chameleons that are less bothered by human contact. A chameleon that is hissing and retreating in its cage should not be picked up, and while their bites are not poisonous, they can be quite painful and are best avoided. 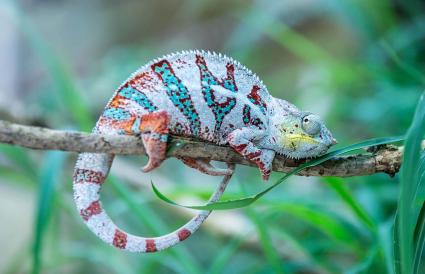 18. Chameleons Are a Long-Term Commitment

Chameleons can live on average nine to 10 years when kept in captivity. It's not known for sure how long they live in the wild, but it's believed to be about two to three years. However, the Madagascan chameleon has the world's shortest lifespan for a vertebrate, living just about three months in total.

If you're considering getting a chameleon, it pays to learn more about them. They are not the easiest lizards to keep because of their temperature and humidity needs, and they are not always the easiest to handle. They can make excellent pet lizards with the right environment and a suitable habitat designed to keep them healthy and stress-free.