Litter training your bunny will give him freedom to roam the house without leaving a trail of droppings and puddles behind him. With these tips on the right litter box setup and some patience and persistence, you can teach your pet to relieve himself in one convenient place.

According to Darwin Veterinary Centre, rabbits have two natural tendencies that make them good candidates for litter training.

Keeping these points in mind, you can create a litter box setup that's perfect for house training your bunny.

Gather the following supplies and prepare the space where you will give your pet his initial training.

Ohio House Rabbit Rescue recommends starting out with about a 4' x 4' enclosed space, and you can create this area using an exercise pen. Depending on where you locate the setup, you may also want to line the bottom of the area with plastic sheeting to protect the floor beneath.

Your choice of litter box depends on the size of your rabbit. According to the San Diego House Rabbit Society, a medium to large cat litter box usually works well for small to medium-size rabbits. For larger rabbits, a plastic, 70-quart storage container can be converted into a litter box rather easily. You just need to cut a doorway in one side and make it low enough and wide enough for your rabbit to enter the box easily. An entrance about eight-inches wide with a three-inch high bottom is suitable for most rabbits, but you should customize these measurements for your pet's comfort. Place the box in a corner at the back of the enclosure.

There are different types of litter on the market, but recycled paper bedding is safe for rabbits and recommended by many rabbit organizations including the San Diego House Rabbit Society and Ohio House Rabbit Rescue. Don't use clumping litter because it could cause a blockage if your rabbit eats any of it.

Line the litter box with newspaper, cover the entire bottom with about two inches of litter, and then place a pile of hay at the far end of the box's entrance. The hay will lure your pet into the litter box, and he'll naturally relieve himself while he's snacking and relaxing there.

You'll need dishes for your rabbit's food pellets and water. Place these dishes away from the litter box area so they won't get soiled if your pet sprays over the side of his box.

Since the training station will also be your pet's main living space during the day, he'll need a hideaway where he can get away from it all when he wants to be by himself and sleep. Place the hideaway in the other back corner across from the litter box.

Giving your pet a little reward immediately after he uses his litter box will help him associate relieving himself in that spot with something good happening. You can offer a piece of apple, carrot, or some other healthy treat he especially likes.

You'll need a scoop for removing excess droppings in between full litter changes. You may also want to use an enzymatic cleaner like Nature's Miracle to wash your rabbit's litter box to keep smells to a minimum. You can also use this product to clean other areas in your home if he has an accident while he's outside of the training station. 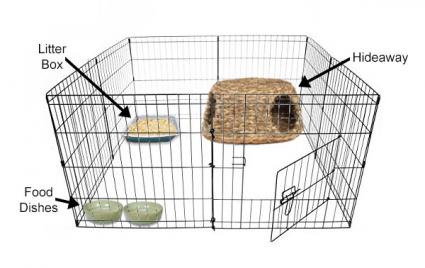 Steps to Litter Training Your Rabbit

Litter training can take anywhere from a few days to a few weeks. Keeping your pet's routine as consistent as possible will help him get the hang of using his litter box more quickly.

According to the House Rabbit Society, rabbits have a better chance at litter training success if they are spayed or neutered before training begins. This eliminates the urge to mark territory, and it makes the entire training process much easier. Younger rabbits also train more easily than older rabbits. Additionally:

Set Your Rabbit Up for Success

It takes some work to litter train a rabbit, but you might be surprised at how quickly your pet catches on. Training also gives the two of you more opportunity to spend time together enjoying each other's company. Keep your training routine consistent, reward your pet's successes, and house soiling will soon be just an unpleasant memory.