If you believe bigger is better, you should check out big rabbit breeds. Some giant rabbits make excellent pets because of their docile natures, while others require careful handling. The American Rabbit Breeders Association (ARBA) recognizes a variety of large breeds, and each has its own charm.

Called the "king of rabbits" because of its massive size, the Flemish Giant is the biggest rabbit breed of all. The breed is thought to have originated from stone rabbits in the old Flemish region. According to the National Federation of Flemish Giant Rabbit Breeders (NFFGRB), Flemish Giants typically reach an adult size of 14 pounds. However, this breed has been known to hit weights as high as 22 pounds.

According to the National Angora Rabbit Breeders Club (NARBC), this breed must reach at least nine and a half pounds for senior bucks and 10 pounds for senior does. This gorgeous, show-stopping animal has long white fur and pink eyes. The wool can be removed with sheers or by combing.

The Giant Chinchilla Rabbit Association has a nice collection of images of Giant Chinchilla rabbits. This rabbit was developed in the United States by Edward H. Stahl and dates back to 1921.

The French Lop's history is clear in its name. According to the Lop Rabbit Club of America, the breed hails from France, where it was created in the 1800s by crossing an English Lop and a butterfly rabbit. 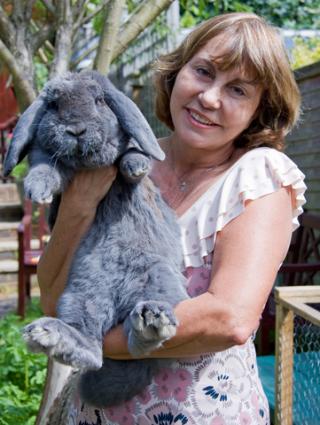 Now that you know a little more about some of the giant rabbit breeds, you should have a better idea if one of these rabbits really interests you enough to take on caring for one. Although the majority of ARBA-recognized breeds are listed, you could also consider other varieties of giant rabbits like the German Giant, British Giant, or the Spanish Giant.