The silvery chinchilla bunny was originally bred in France for its meat and fur and was introduced in the United States in 1919. Over the next few years, distinct lines were drawn between the Standard Chinchilla (the smallest of the three), the American or Heavyweight Chinchilla, and the Giant Chinchilla rabbit. All three are breeds are hardy and stocky, but their sizes vary widely. The unmistakable bulk of the Giant Chinchilla has arisen from crossbreeding between the chinchilla and the Flemish Giant in early efforts to produce a large rabbit for meat.

Appearance of the Giant Chinchilla Bunny

According to the Giant Chinchilla Rabbit Association:

The Giant Chinchilla has a special reputation as a loveable lay-about, an easygoing fellow who doesn't need much exercise, just a comfortable place to lounge and plenty of love and attention. Giant Chinchillas enjoy being handled if they're gently socialized from an early age.

Giant Chinchillas can be very tame, and females make loving, attentive mothers, but don't expect a rabbit to be as outgoing as a dog or cat, and make sure your rabbit can make an easy escape from the poking and prodding hands of little children. Some breed experts recommend Giant Chinchillas for adult households or those with children over the age of ten.

Grooming Needs of the Chinchilla Rabbit

The short, straight, soft fur of the chinchilla doesn't require much regular grooming. The hairs are dense, but Giant Chinchillas don't shed much more than any other house pet. It's important to note it's typically not necessary to bathe a rabbit, and it can be dangerous for the animal since it can be easily stressed or injured during the process. 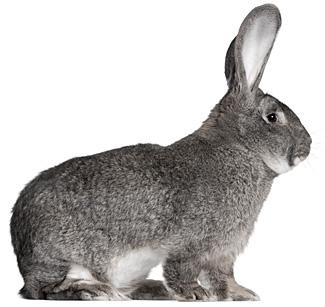 To keep your pet in good condition:

Giant Chinchilla rabbits are hardy and generally resistant to disease. They can live for up to 8 or 9 years if properly cared for. Make sure your rabbit has plenty of space; cages should ideally be at least six feet long for full-grown Giant Chinchillas. Pay close attention to safety; while they aren't as vulnerable to household accidents as smaller rabbits, they can still get into trouble. Try to rabbit-proof your home before letting your Giant Chinchilla wander around freely.

Giant Chinchilla's eat the same type of diet as other rabbit breeds which consist of hay, pellets and fresh herbs and veggies. They should have hay available to chew on at all times as well as fresh, clean water. Adult rabbits should be fed a half cup of pellets per day for every six pounds of weight whereas babies should be allowed to eat as many pellets as they are willing to eat until about age one year. Fresh fruits and veggies can be fed daily based on your rabbit's weight. Follow a rate of two cups of veggies and a maximum of two ounces of fruit per six pounds of body weight.

If you have your heart set on buying a Giant Chinchilla rabbit, a good place to start is the breeder directory on the Giant Chinchilla Rabbit Association website and the Livestock Conservancy website. You can also find them up for adoption through shelters and rescue groups via websites such as Petfinder.com and Adopt-a-Pet. The House Rabbit Society also maintains a list of rabbit rescue groups by state. The average sale price for a Giant Chinchilla ranges from $40 to $100 or more. You'll need to factor in the cost for care as well including:

You'll also need toys, cage dishes and water bottles and grooming supplies with costs depending on which items you decide to purchase plus the number of bunnies and the size of your cage or hutch. 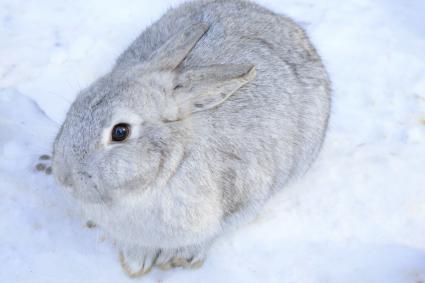 Choosing a Rabbit as a Pet

Before you choose a rabbit as a family pet, it's a good idea to consider the history of the breed, its typical temperament, and any special grooming and health needs that you may need to take into account. Just like dogs and cats, rabbits are heavily influenced by genetics. The breed you choose can affect everything about your new pet, from nutritional needs to life expectancy.