The Origin of the French Angora Rabbit

Prior to 1939, any rabbit capable of growing and producing a wool coat suitable for harvest was classified by the American Rabbit Breeders Association (ARBA) as an Angora Wooler. In 1939, differences and variation in the breed led to the breakdown of the breed into two categories: English Type and French Type. In 1944, ARBA officially declared the two types to be two separate rabbit breeds: The English Angora and the French Angora rabbit.

French Angoras are the second largest of the ARBA recognized Angora rabbits. They weigh between 7-1/2 and 10-1/2 pounds with 8-1/2 pounds being the ideal weight.

French Angoras have two coats of hair: a coarse guard hair, which extends past the undercoat, and a thick, crimped wool coat. The wool may grow as long as six inches but should be a minimum of two inches. Unlike the English Angora, which has thick wool covering its face, ears and feet, the French Angora's wool is confined largely to its body. The face and front feet from toes to ankles are clean of wool. The ears and hind legs may have some wool tufts, but this is discouraged amongst shown animals. 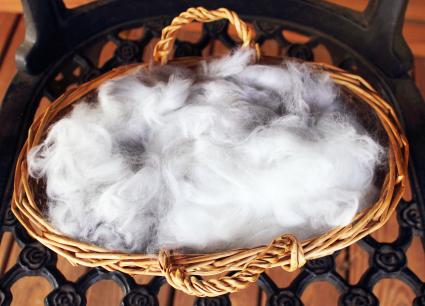 The French Angora rabbit was originally bred for two purposes: wool and meat. Therefore, the body of the rabbit should be oval shaped, firm, and strong. The head should also be oval shaped and in proportion to the body.

Temperament of the French Angora Rabbit

French Angoras are typically mellow and gentle. Like other rabbits, the more they are handled, the more likely they are to become friendlier and more even-tempered. The regular grooming and fur maintenance required, as well as the harvesting of the wool, help to make the French Angora a sweet and gentle rabbit.

Care and Maintenance of Your Angora Rabbits

While French Angoras are not as typically high maintenance as some other Angora breeds, they do require frequent grooming as well as harvesting of their wool two to three times a year. Typical maintenance and care of the French Angora includes:

They can be kept indoors or outdoors and do not require vaccinations. Feed them a mixture of hay and pellets that are at least 18 percent protein. French Angora rabbits should be fed based on their age:

If signs of wool block appear, consult your veterinarian immediately.

If you are interested in acquiring a rabbit for showing, breeding or wool producing purposes, the French Angora breed is ideal for all three. The gentle temperament, combined with the lower-maintenance coat help to make this breed one that many people can handle.