English Lop rabbits may be best known for their long, floppy ears that actually drag the ground as adults. However, their wonderful temperaments are equally impressive.

Both the American Rabbit Breeders Association (ARBA) and its British counterpart, the British Rabbit Council (BRC) have specific standards for the English Lop. Unless you plan to show your rabbit or start a breeding program, you may not be concerned about whether your rabbit conforms to any breed standard. However, knowing the basics of how an English Lop should look will help you identify this breed.

English Lops have large heads and wide-set eyes that glisten. The body is shaped similar to a mandolin. The ears should be balanced with the body. When laid back, the tip of the ears should reach the rise on the rabbit's back. The ears should also be rounded and not pointed. These rabbits have short, soft fur.

According to the BRC standard, English Lops should be as large as possible without looking out of proportion. Their long ears are an amazing feature that really sets this breed apart from other rabbits. In fact, they have the longest ears of any rabbit breed according to Guinness World Records. The English variety has a long, slender body. Other strains of Lop rabbits tend to be shorter and wider.

Coat and Color of English Lops

This breed can be solid-colored or broken-colored (color broken by white markings). According to the BRC, any color is acceptable, and marked rabbits should have a distinct, butterfly-shaped smut marking around the nose. Popular colors include: 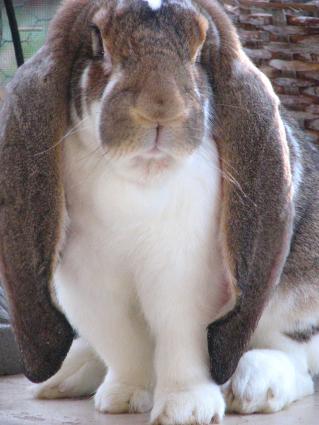 English Lops make wonderful family companions. They are gentle and loving. However, small children should be supervised closely since these rabbits' ears can easily be injured. They love to be petted and enjoy playing outside or throughout the house. However, they don't jump much since their ears hinder such movement.

English Lops face the same typical health issues as other breeds, including cases of diarrhea and overgrown teeth, but one of the greatest concerns is ear issues.

Ear Issues and the English Lop

According to the House Rabbit Society, the English's ears account for as much as 12 percent of its surface, and the breed is prone to ear infections. Left untreated, ear infections can turn into more serious problems like head tilt. The extreme size of the ears, and the fact that they drag on the ground, makes them even more susceptible to injury, so try to house this rabbit in areas free of rough surfaces where the animal can move freely.

Since this breed has such a short coat, it should be protected from extreme cold and extreme heat.

Grooming needs for this breed are minimal.

This strain of Lop rabbit has been dated as far back as England in the 1700s, but little is known about its development. It is one of the oldest breeds of domestic rabbit. During the Victorian era, many households kept rabbits as pets, and this breed was a huge favorite. Although there are additional strains of Lops today, such as the Holland Lop and the French Lop, the English Lop is considered the original Lop rabbit.

Other rabbit supplies you will need include toys, food dishes and water bottles.

Your English Lop Could Be the Love of Your Life

If you're looking for an affectionate animal and want something a bit out of the mainstream, the English Lop breed may be perfect for you. These rabbits are known to sit for long periods of time as someone scratches behind their ears. They often come when called, and they appear to recognize their owners. Domestic rabbits of all types make wonderful companions, but those who love the Lop say that they have just a bit more personality and sweetness. Perhaps that's why they are commonly referred to as the "kings of the fancy."