An important part of caring for a ferret as a pet is knowing the signs that they are ill, or even worse, dying. If you can catch the signs right away and get medical intervention, you can potentially keep your ferret healthy and live a long, happy life with you.

What Are the Signs of a Ferret Dying?

There are several common symptoms you will see with a ferret that is feeling seriously ill. Without immediate treatment, any of these can quickly lead to a ferret succumbing to their illness and dying. It's very important not to delay getting your ferret to a veterinarian if you see any of these signs, as it is normal behavior for a ferret to hide signs of their illness. With many common ferret medical conditions, by the time they are displaying symptoms it may be too late to help them, and calling your veterinarian immediately is crucial to their survival.

A ferret that appears weak and doesn't move around his cage is needs immediate medical attention. Even less severe lethargy, such as a noticeable decrease in activity level and interest in playing, can indicate a medical problem may be brewing in your pet's system. Another sign associated with lethargy is your ability to handle your ferret. Ferrets are generally quite acrobatic and energetic. A sick and dying ferret will accept handling and act almost limp in your hands, which a healthy ferret would not do.

Respiratory infections are a common problem with ferrets and the symptoms include wheezing, labored breathing, panting, heaving, as well as sneezing and/or coughing. You may also notice that their gums are pale and appear either white or a blue shade which indicates a lack of oxygen. A ferret suffering from a respiratory infection or pneumonia may also have a nasal discharge and will have a fever. 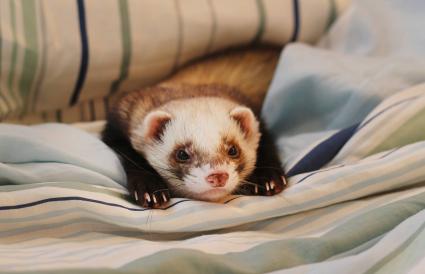 Lack of Appetite and Weight Loss

Refusing to eat or drink for more than 24 hours is a common symptom of ferrets that are very ill. Lack of drinking is particularly problematic as this can increase their dehydration level at a time when proper body hydration is critical to fight off an infection or other type of illness. On the other hand, if you notice your ferret is drinking water at an unusually high rate, this can also indicate they are dealing with an underlying medical condition. While it is normal for ferrets to lose weight at certain times of the year, if you notice that they are losing weight at other times, coupled with other symptoms, this is a definite cause for concern.

Diarrhea, Bloody Stool or No Feces

Any type of unhealthy feces, such as watery diarrhea, abnormally foul-smelling feces, black or tar-colored stool, and/or bloody stool, is a sign that your ferret needs medical attention right away. Likewise, if you notice that your ferret has not eliminated at all in a day or more, there's a possibility they have a serious intestinal issue such as constipation or even a blockage. You should also look for signs that they are attempting to go and straining to produce feces or urine as a sign of a serious illness. You should also examine their rectal area for signs of bleeding or if the anus is protruding abnormally from the body.

It's not abnormal for an animal to vomit every once in a while, but if you see your ferret vomiting frequently, this is a sign of a serious problem. Even more significant is any signs of blood in the vomit which might indicate that the ferret has eaten something inedible and now has an obstruction which can be fatal.

When they are nauseous, a ferret will rub their face against objects, drool excessively and work their paws against their mouths. Nausea can be a sign of several severe illnesses, as well as dental disease and pain from abscessed and diseased teeth and gums.

One particularly fatal disease that ferrets are susceptible to is distemper, which is similar to the canine distemper virus. If you notice your ferret has a discharge of pus from its eyes or nose, this can be a sign they are suffering from distemper and need immediate veterinary attention. 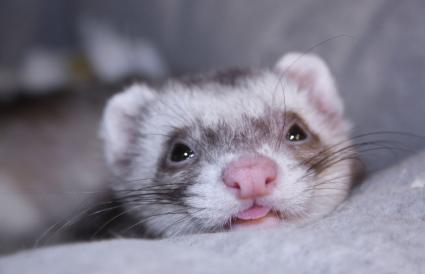 A ferret that is sick and dying will have a dull-looking coat. You may also see hair loss, which in the case of adrenal gland disease often starts around the base of the tail, although not always. Of course, hair loss and thinning are common with senior ferrets but can be a sign of potential problems to come even if the ferret seems otherwise healthy. Other signs related to their skin include rashes and inflammations on their skin, persistent chewing and itching and hot spots. Rashes under the ferret's skin and on their belly along with crusty, inflamed skin around their face is a sign of distemper.

Signs of seizures, such as tremors or convulsions, are a sign to get to a veterinarian ASAP. These can be a sign of a serious neurological condition or that the body is giving in to an illness and the ferret is close to dying. Other signs of potential serious neurological problems are a constant tilting of the head, rapid eye movements (known as nystagmus) and uncontrolled body movements and lack of physical coordination. Semi or full paralysis can also occur, particularly in cases of distemper. You may also see them acting as if they have gone blind or difficulty seeing as well as they previously could.

Know the Signs of a Dying Ferret

Since ferrets can keep their symptoms hidden, while many of these might seem mild, you should get your pet ferret immediate medical attention if you see them. A ferret that can display any of these symptoms can easily succumb and die in a shockingly short window of time. It's wise to have already researched and found a veterinarian who is experienced with ferrets who you can call if you have any medical concerns to ensure your cuddly ferret friend stays well and healthy.

0
Comments
© 2006-2020 LoveToKnow, Corp., except where otherwise noted. All Rights Reserved.
Resources, Advice & Tips for Covid-19
Read More
What Are the Warning Signs of a Ferret Dying?