Knowing how to train a ferret allows you to develop a closer relationship with your pet. Aside from being adorable, ferrets are highly intelligent and can be trained to perform a variety of behaviors. You can also use positive training to work on some of their more undesirable behaviors, such as nipping and biting.

How to Train a Ferret: Tips for Beginners

Before you start training a ferret, it helps to have some general tips to make your training successful.

How to Reinforce Behaviors

Ferrets enjoy eating, so using small bits of food works well as a training reward. Try to use extra- special food treats that are only given in connection with the training. This could be some plain cooked chicken or pieces of a hard-boiled egg, or commercial ferret treats. Every ferret is different, so yours might find playing with a toy or affection from you as a stronger reward. You can experiment to see what your ferret loves the most.

How to Potty Train a Ferret

You can potty train a ferret to use a litter box, which can make cleaning their cage much easier. Unlike a cat, this isn't an entirely natural behavior for them, so it will take more time and patience to potty train them.

This method involves some observation to time it correctly. You'll need to be awake and at the cage before the ferret wakes up, and also to have a good idea of when he usually goes during the day.

Another way you can help him learn where to go is by placing some of his feces in the litter box so he gets the idea that he needs to go there. It's important to keep the rest of his cage very clean to reinforce this idea.

If your ferret has free roam of the house, it's much easier to keep them caged when you are litter box training as it's harder to catch them before they go when they're all over the house. You can still potty train them if they're free roaming but realize it will take a bit longer and requires more supervision on your part.

Never punish the ferret for not using the box. This will only scare the ferret and make him stressed around you. If you see him going outside of the box, say nothing and just pick him up and put him in the box and reward him if he uses it. 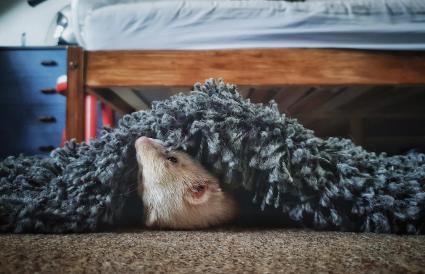 How to Stop a Ferret From Biting

Nipping is a very common problem with ferrets, as this is a natural behavior that does not have a negative connotation from the ferret's point of view. You can train a ferret to stop biting you much the same way you'd train a puppy not to nip. Note that nipping is a normal behavior with play and attention-seeking. If a ferret is biting you because they are scared, you need to work on reinforcing them to trust you and avoid picking them up until they are comfortable with your presence.

To start, you will need:

Having all of your supplies ready to go helps, as timing is important for the ferret to understand the consequence to his behavior.

Train a Ferret Not to Bite: Step-By-Step

These will only make the ferret scared of you, and you run the risk of getting the unpleasant spray in your eyes and mouth.

What Tricks Can You Teach a Ferret?

Ferrets can learn a number of cute tricks, and what you teach them depends on your time and imagination.

The easiest way to train a ferret is to use clicker training, which involves pairing the sound of a small clicking device with treats.

When working with a ferret, there are a few general training guidelines to follow:

What to Use to Reward Your Ferret

Train Your Ferret to Come When Called

To get ready for this trick, have some treats and your clicker handy. Take your ferret and place him in a room with the doors closed and walk away from him. A small room is ideal, as he will come to you eventually.

Train Your Ferret to Roll Over

You will need to train the ferret on a flat surface, which could either be on a floor or up on a counter space if it's easier for you to stand. This behavior is more complicated to teach, so it's easiest to split it into three sections and only start the next section after he has reliably learned the previous one.

Rolling on His Back

Once you can get your ferret to turn his head to follow the treat reliably, you're ready for the next section of the behavior.

The Final Roll Over

You're ready for the final section of teaching this behavior!

Simple Ways to Train Your Ferret

While litter training a ferret can take a bit more time than the same steps with a cat, it's not hard to do and just requires some consistency, a set schedule, and lots of rewards. Ferrets are very intelligent and once you start training them, you'll see how easy and fun it is. You can learn additional tricks like jumping through hoops, sitting and begging, and spinning in a circle. As long as you and your ferret are having fun, you can be creative with the types of tricks you learn together!

0
Comments
© 2006-2021 LoveToKnow, Corp., except where otherwise noted. All Rights Reserved.
How to Train a Ferret With Simple Techniques