Ferrets are adorable, furry, and cuddly pets that are extremely popular. Ferrets are similar to rats in that they do not have separate breeds but can be categorized by color and color patterns. They also come in three different sizes and coat lengths.

One of the most common ways of distinguishing ferret types is through their coat colors as detailed by the American Ferret Association. Most of these colors do not affect a ferret's personality in any way, although some do come with additional health concerns.

Like other animals with albinism, albino ferrets are white due to a lack of pigmentation. Their guard hairs and undercoat will be either white or cream. They also have red eyes and a pink nose and skin. Albino ferrets have a greater likelihood to be born deaf than other color types. 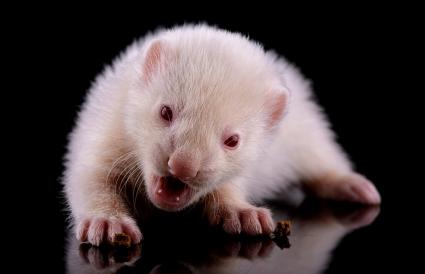 Black ferrets are black all over with black guard hairs. Their undercoat may be white to golden brown. They will have black or dark brown eyes and noses. 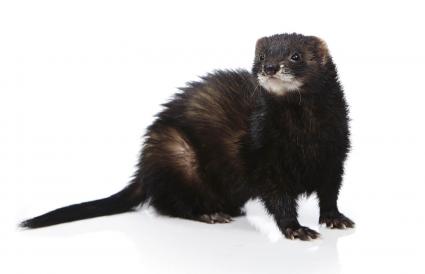 These lovely ferrets appear black on first glance. Up close you can see that they have deep dark brown guard hairs and their undercoat is either white or a golden brown shade. They have black or dark brown eyes and noses. 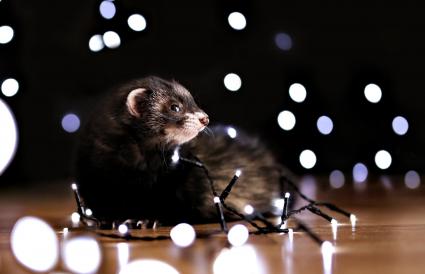 Champagne ferrets are a beautiful soft brown shade with a white or golden undercoat. They may also be called a "dilute chocolate" instead of champagne. Their guard hairs range from a tan color to a paler shade of chocolate brown. They also have burgundy or brown eyes with rings of color around them. The nose can be either pink, beige, or pink with a light brown "T" shape. 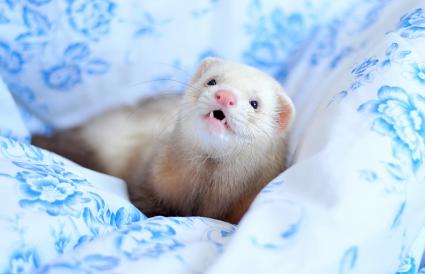 The delicious chocolate ferret comes in a medium brown color reminiscent of the beloved confection. Their undercoat is a white, cream, or golden brown color, and their guard hairs are chocolate brown. They will have eyes that are either brown or a deep burgundy shade. Their noses can be pink, brown, brick, or pink with a light brown "T' shape. 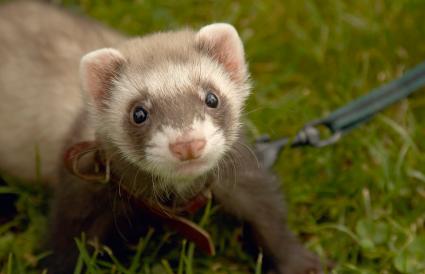 Cinnamon ferrets have a color similar to the spice, which is a reddish brown shade. Their guard hairs are a red-brown color as well, and they will have a "mask" on their face to match. They also usually have dark auburn or black eyes and a pink nose. Cinnamon ferrets are rarer than other color types and often come at a higher price because of it. 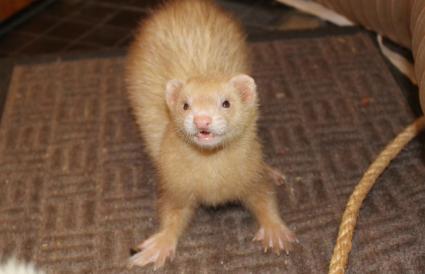 Also known as a DEW ferret, these ferrets may be mistaken at first glance for albinos because they are all white. However, they are not true albinos and do have pigmentation. They also have dark burgundy eyes instead of red albino eyes, and their nose will be pink. Some DEW ferrets will also have some dark brown hair around their chest and shoulder area. Their guard hairs and undercoat are white or cream. Unfortunately, they share with albinos the higher risk of deafness. 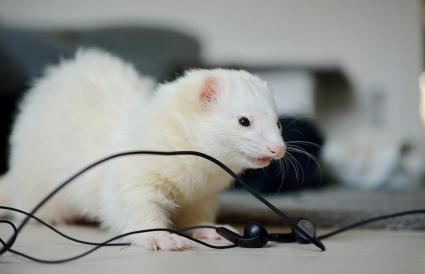 These ferrets are probably the most easily found of all the color types. They are a dark brown color with an undercoat that can range from a soft cream to a warm gold shade. Their guard hairs are a darker warm brown shade. Their nose will be either light brown, a light brown shade with dark spots, or brown with a darker "T" shape. Their eyes range from black to a deep brown. 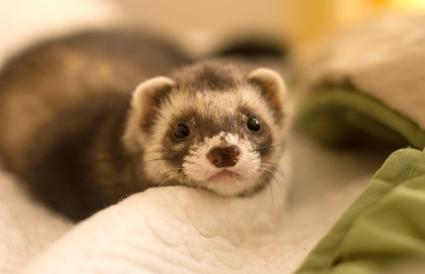 In addition to the colors that ferrets come in, there are also several color patterns recognized by the American Ferret Association.

It's easy to see where this color type gets their name. The "blaze" is a white stripe that runs from their head down to their tail along the spine. The rest of their coat can be any color other than white. They will also have a bib of white fur on their chests and white around their eyes and neck. Some blaze ferrets also have rings of color around their eyes and a mask. Their eyes will be dark red to brown, and their noses will be pink. Blaze ferrets, while adorable, suffer often from Waardenburg Syndrome, which causes about three-quarters of them to be deaf. 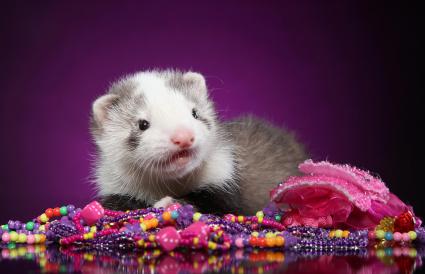 Also called "pewter," these ferrets may remind you a bit of a chinchilla or smoke-colored cat. They have silvery gray hair with black hairs mixed in to give their fur a shimmery appearance. They will also have pink noses and dark eyes. This color pattern is not currently recognized by the AFA. 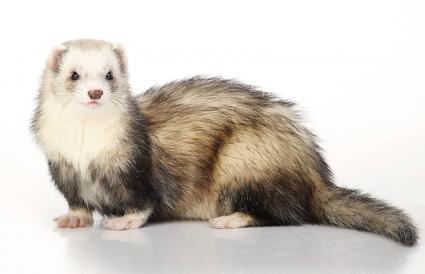 Mitts refers to a color pattern where the ferret has white paws that extend to the lower section of the ferret's feet. They will also have a white "bib" on their chests directly under their necks. Four color types come with a mitts pattern: 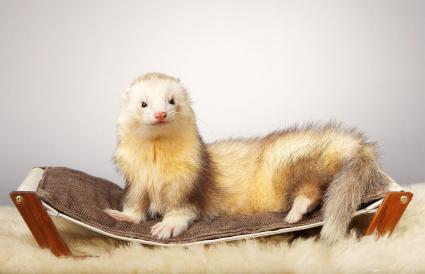 Panda ferrets have a mix of one color plus white, which is found on their head, chest bib, belly and the tip of their tail. They will also have circles of color around their eyes. Additionally, they have white mitts on their paws and feet, dark burgundy eyes, and a pink nose. Some panda ferrets may also have spots of color on their white bellies and may have mitts and patches of color on their knees. Like the blaze ferrets, about 75% of panda ferrets will be deaf due to Waardenburg Syndrome. 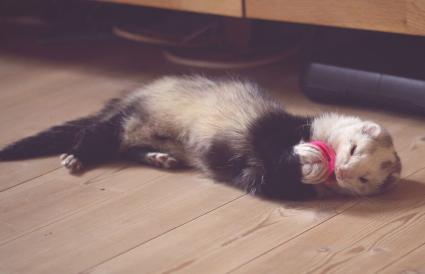 Also known as "color point" ferrets, these ferrets have darker brown "points" on their feet, tail, and face mask just like a Siamese cat. They also will have a dark brown belly. The rest of their body may be either chocolate, cinnamon, or sable. Their eyes will be a dark brown to black color with a pink or beige nose. Siamese ferrets also have a distinctive "V" shaped mask on their faces. 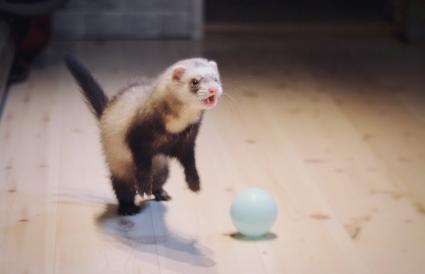 A solid pattern refers to a ferret that is one solid color all over its body. There should be no white on the body at all, and the guard hairs will match the fur color. Solid patterns can come in any color but white.

With a standard pattern, the ferret is a solid color all over, but their guard hairs will have some white mixed in with colored ones. This addition of white guard hairs makes the base fur color appear lighter than with a solid pattern ferret.

There are two basic sizes of ferrets.

Standard ferrets are the most common body type and size that can be found today. Their heads should be triangular and longer rather than wider, and they have a long, slinky body. They are also known as "whippet" ferrets because they resemble the dog breed's long body and neck. These ferrets are also sometimes referred to as gazelles.

Bulldog ferrets, like their namesake dog breed, are thick in the chest with big, rounder heads and stocky legs. Bulldog ferrets are not as common in the U.S. and are more popular in Europe.

As with ferret sizes, they also come with different coat types. The most common ferret coat length is short hair. There are also long-haired ferrets that have a somewhat longer coat than the short haired variety. They are not very common, and many do not look much different from the short-hair ferrets. Some short-hair ferrets will even have a longer coat during the winter months, blurring the distinction between the short and long-haired types.

Angora ferrets are often mistaken for long-hair ferrets. The key difference between an angora and a long-haired ferret is that they have no undercoat. An angora ferret's hair can grow between two to four inches in length. Angora ferrets also tend to have problems nursing their young due to a congenital condition.

It's important to know when choosing a ferret that their differences are primarily coat color, coat length, and size. All of the different ferret types generally have the same behaviors, activity levels, and care requirements, so it's a matter of choosing the color, coat, and size that appeals to you the most. Keep in mind, though, that certain types do come with health concerns, particularly deafness, although a deaf ferret can still make a wonderful pet.

Comments
© 2006-2021 LoveToKnow, Corp., except where otherwise noted. All Rights Reserved.
Common Ferret Types and Their Characteristics