In the quest to own new and unusual pets, exotic pet lovers have discovered the capybara. These animals are definitely fun to look at and have positive qualities but there are absolute drawbacks to keeping a capybara as a pet.

What Is a Capybara?

A capybara is the largest rodent in the world. They are native to most of the continent of South America. There are also some in Florida, though as an invasive species and not a native one. The capybara looks a lot like a large Guinea pig which they're related to. They're also related to another popular pet, the chinchilla.

Physical Characteristics of a Capybara

An adult capybara will weigh between 60 to 175 pounds and the males tend to be smaller than females. They can be a little under two feet tall and about four feet long, which is about the size of a medium-size dog. They look like a Guinea pig with a short wiry coat and longer legs, with the hind legs longer than the front legs, and semi-webbed toes. They also have a big wedge-shaped snout, small ears and dark intelligent eyes. Their fur ranges from lighter brown, dark brown, red or grey with short dark brown legs. Their coat generally does not smell as it's wiry with no undercoat and they keep fairly clean from swimming regularly. 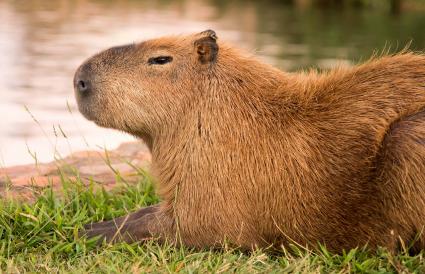 Capybaras are a very social species and they live with other capybaras in groups of between 10 and 30 others in the wild.

Keeping a Capybara As a Pet

Owning a capybara is a relatively recent trend in the pet world. Like all exotic pets, there are a lot of specific care requirements for these animals that makes keeping them difficult for the average person.

The capybara is a herbivore and in their natural habitat eats a diet primarily of marshland and forest grasses, tree bark, berries, seeds and fruits. They also regularly eat their own feces which aids in their digestion. Capybaras tend to graze for their food in the wild and it can be difficult to get them to eat food presented to them as they can be picky. Capybaras kept as pets are usually fed hay (orchard, Bermuda or Timothy), Guinea pig pellets fortified with vitamin C and high fiber biscuits. They can eat fresh fruits and vegetables as an occasional small treat. They also should be given a grassy area outside to roam and feed in but this can be complicated. The grass needs to be appropriate for the species and pesticide and chemical-free. 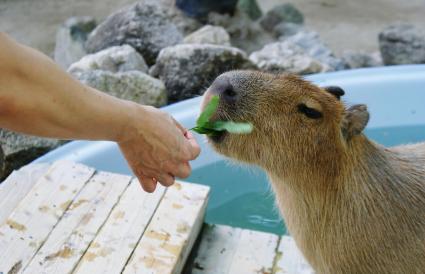 Since capybaras are semi-aquatic species, they need to be able to swim regularly. This means providing them with a pool large enough for them to swim in. Capybaras also need to roam and will not do well confined in a small space. They can become destructive if they don't get to move about enough and live in cramped circumstances. To put it in perspective, in the wild a capybara herd will normally live and roam anywhere from five to almost 500 acres. Another factor to consider with their exercise needs is that they can easily become sunburned.

Social Needs of the Capybara

Because this species lives in groups, they will not do well in a home by themselves. A capybara needs at least one other companion of its species to do well. Capybaras that live in a home with humans as a single capybara may become very stressed when they are left alone by their humans. They do enjoy the company of other pets but overall this is an animal that needs its own kind to live with to be truly happy.

Legality of Owning a Capybara

They are legal in Texas and Pennsylvania.The capybara is illegal to own in many states. A few states allow ownership with possession of a special permit or license. You can contact your state's Fish and Wildlife Office to find out about the regulations regarding owning exotics. Keep in mind, even if your state allows you to own one, your local city or county may have ordinances prohibiting it. 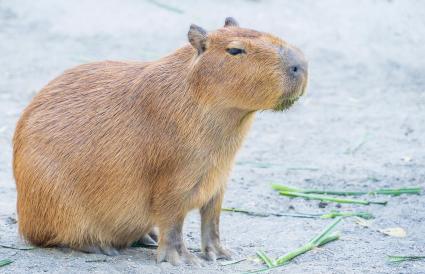 While they can be house trained, especially if brought to a home when young, they still will attempt to eat their feces as this is part of their normal diet. They also urinate and defecate in water, so expect to need to clean their pool often. They also tend to mark their territory and will do this around the home and their pool area.

Obtaining a Capybara can be expensive. A baby will be at least $1,100 and up and since there are few breeders, you'll also need to cover the cost of transportation. Add to this the cost of any special permits or licenses you might need and setting up a suitable home environment and pool. Another difficulty with owning a capybara is finding veterinary care. Locating a veterinarian close to you who will treat your capybara will be hard to do in most states, and if you find a veterinarian the cost for care will likely be higher than comparable medications and services for common pets.

Like many other rodents, the capybara needs to be able to chew often to keep their teeth healthy. If their incisors are not kept trim and grow too long, they will have difficulty eating and can even die of starvation. This includes providing them with daily rations of hay and even better, the ability to roam and chew grasses. Capybaras that have free roam of the house will chew anything they can access, including electrical cords, furniture, and more. 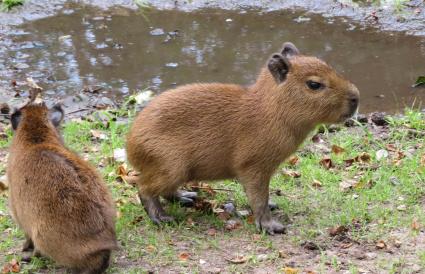 While the capybara is a generally calm and social animal, they are still wild animals. A capybara that feels scared or nervous can bite and behave aggressively. This can be a real concern as their teeth are large and very sharp. Capybaras can also be territorial especially with the males as they reach adulthood, and this can make them less amenable to handling and interacting with their owners. Males can also be territorial to other males and an owner can be hurt unintentionally if he or she gets in between capybaras that are hostile to each other.

While capybaras can be social and intelligent animals, they need a lot of space and a big swimming area to be happy. They also need the company of their own kind, which means having at least two but preferably more capybaras. They need to have a continual supply of items to chew to keep their teeth healthy and they can be destructive in your home. They may also not be legal in your state or require special paperwork.