Mollies are one of the most popular aquarium fish. They're a good choice for beginners, easy to care for and come in an array of beautiful colors and patterns.

All About the Molly

Mollies are related to another popular fish, the guppy, and they have similar needs and care requirements. The name molly comes from their scientific name poecilia mollienesia. Mollies are peaceful fish who do well with other peaceful tankmates.

There are a few species of mollies commonly found in aquariums. Most mollies have been interbred so it can be hard to tell what their original species was. Types found include: 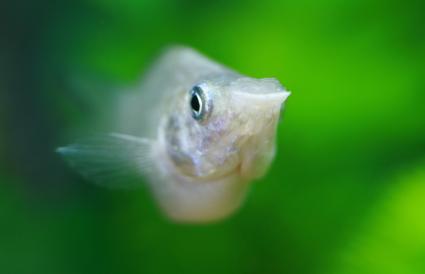 Mollies have a rectangular body with females appearing larger by the tail end. Males are often described as shaped like a torpedo. Black mollies are completely black like their name implies. Sailfin mollies can come in several colors and patterns and are known for their prominent dorsal fin. Mollies can also be found in colors like red, white, gold, orange, platinum and green as well as patterned like marble and dalmatian. Mollies can also have different tail shapes like guppies, such as round, lyre and moon tail, as well as a short body known as a balloon molly.

Mollies are generally small fish. Black mollies grow from three to five inches. The shortfin molly grows up to four inches and the sailfin up to six inches. Females are always larger than males.

Mollies live on average three to five years. They are known for getting the shimmies or molly disease, which is caused by stress and water that's too cold for them. Mollies can also get other common fish ailments like velvet, fin rot, swim bladder disease and ich.

Although you can keep a school of mollies in a tank of about 29 gallons, if you intend to breed you should have one that's at least 45 gallons to accommodate the separate birthing and fry-raising areas. Mollies prefer a tank with a lot of plants, especially live ones. Mollies are also a freshwater fish where you can add salt to their tank, although it is not necessary for them to thrive. They can do well in either a freshwater or brackish water tank and in general prefer "hard" water with a PH of 7.5 to 8.2. Their best temperature range is between 72 and 85 degrees Fahrenheit. A filter is also important for mollies and you should do a 25 to 30% water change at least once a week. 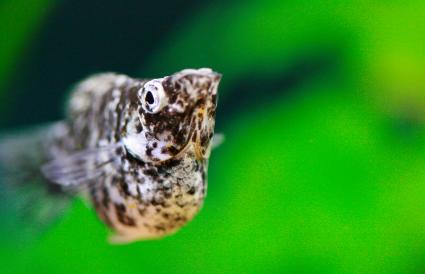 Since males can be aggressive to other males over competition for females, it's important to always have a two to three females per male in a tank. This can reduce male aggression as well as female stress because males will always want to mate.

Mollies can be fed fish flakes that are ideally supplanted with live and frozen food like brine shrimp, daphnia, tubifex, bloodworms and blackworms. They also can eat vegetables like peas, squash, cucumbers, zucchini and lettuce. Fresh vegetables should be blanched and diced for easy digestion. If you don't feed vegetables, provide them with other plant-based food such as algae wafers. Mollies should be given food two to three times a day in small amounts. A good rule to follow is to only give them what they can eat in under five minutes.

Mollies can live happily with other types of fish that are also peaceful. Some good common tankmates for mollies include:

Mollies are livebearer fish which means they do not lay eggs but rather gestate their young and give birth to them live. You will not need to do much to get mollies to breed as long as you have males and females in the same tank. Keeping the tank on the warmer side and feeding more insects can help encourage mollies to breed. It should be noted that molly females can store sperm from the male for several months and can give multiple births up to one month apart from one single mating.

Female mollies will gestate their young for about 60 days. They can give birth to between 40 and 100 fry. Mollies that are young or are having one of their first few pregnancies will tend to give birth to a smaller rather than larger number of fry. When a molly female is near her time to give birth, you will need to separate her from the rest of the tank. This can be done in the same tank using a breeding net or box, or you can put her in a completely separate holding tank.

Once the female has given birth, she should be returned to the main tank immediately. Otherwise there's a good chance she will begin to eat her young. Baby mollies should be kept separate from the main tank until they have grown large enough that they are too big to be eaten by other fish. A suitable nursery tank will be around 10 gallons in size. They should be fed baby brine shrimp, microworms and ground up flakes. You should also provide lots of floating plants in their tank that they can hide in as they grow bigger. A heater is also important for growing fry to thrive.

Mollies are a great fish choice for beginners through experienced aquarium owners. They're colorful, easy to care for and breeding them can be a fascinating addition to your hobby. As long as you care properly for pregnant mothers and keep the baby fry safe, you can enjoy breeding and caring for this gentle fish.