Betta fish are popular because they're generally they're hardy fish that are not difficult to care for, and they come in a kaleidoscope of striking colors and fin shapes. They're also intelligent fish that will actually interact with their owners.

Do Betta Fish Recognize Their Owners?

Surprisingly, science has found that fish are capable of recognizing their owner's face, even if the owner is standing by the tank with other people. Fish can develop an association between something they like, being fed, with the person who feeds them. The more you interact with your betta fish, the more likely they will be to recognize you. It's normal for betta fish to swim to the front of the tank when an owner comes up to it. This can be in anticipation of being fed, though they will also seek out their owner because they're interested in what happens next.

Betta Fish Bonding With Their Owner

Betta fish may not "love" their owners in the way that a dog or cat would show affection, but they will show a clear interest and affiliation with their owners. Bettas are also known to have good memories and can remember people despite not seeing them for several weeks or more. They can also remember the layout of their tank and will remember where plants and decorations were before you moved them. It's this ability to remember that helps them to bond with their owners over time. Thus, the more you do with your fish, the more likely you are to strengthen the bond that the betta fish feels with you. It's also healthy for your fish, as lack of stimulation can lead to depression and stress.

How Can I Play With My Betta Fish?

There are a number of fun ways you can play with your betta fish and provide him with mental stimulation and a healthy environment. 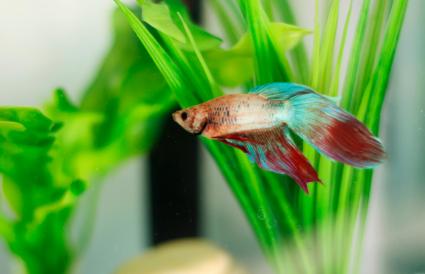 Try placing a small floating ball in the aquarium, such as a ping pong ball or a small plastic cat-toy type ball. Push it around the surface of the aquarium and wait for your betta fish to swim up and interact with it. Some bettas will swim around it, while others may actually try to brush against it or push it themselves. If your betta interacts with the ball, you can play with him by gently pushing the ball with your fingers and encouraging him to move around after it.

There are toys sold in pet shops that consist of a floating ball with a mirror that hangs underneath. The idea is that the betta will swim up to the mirror and see a reflection of themselves and "flare" up their fins. While these toys do provide stimulation, they can also cause a lot of stress for your fish as they will perceive their reflection as another fish in the tank that's a threat. Use these toys sparingly or avoid them altogether and instead choose toys that won't be stressful for your fish.

Decorate the Tank Outside

Betta fish are interested in vibrant colors, so placing some decorations on the outside of the tank can be a fun and stimulating activity for your fish. You can take a pack of brightly colored construction paper or Post-it notes and cut them into shapes and tape on to the outside of the tank glass. Rotate them as your fish shows interest in them. You can experiment with attaching shiny objects, such as metallic or sparkly decorative papers, or even hang small colored glass ornaments against the tank, as the shine and movement will definitely spark your fish's interest.

Another fun game to play with your betta is teaching them to touch your finger when you place it in the water. You can do this by placing your finger gently on the surface of the water and sprinkling some food around it. You will need to use the floating type of food for this, as you want the food to stay at the surface, and you may want to shut off the filter temporarily so the flow doesn't spread the food around the tank. Eventually your fish should touch your finger while he's going for the food. If you keep repeating this activity, he may begin touching your finger first before getting his meal. 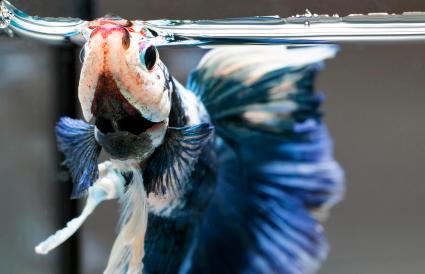 You can actually train a fish using the same principles that animal trainers use with clicker training. You can buy fish training kits or train them on your own. Some tricks that betta fish owners have taught their fish include swimming through hoops, jumping out of the water, pushing a ball around the tank, and more. You'll be amazed at how quickly your fish can learn tricks, and this is an excellent way to not only bond with them but prevent boredom and keep your fish happy and healthy.

Developing a Bond With Your Betta Fish

It might be commonly thought that fish are not intelligent and don't have emotions, but anyone who has owned a betta knows this isn't true. These fish are smart enough to recognize their owners and respond to your presence. While they may not show affection like our furry types of pets or respond to their name, they can show interest and affiliation toward their owners and will reciprocate if you spend the time to develop a positive relationship with them.

0
Comments
© 2006-2021 LoveToKnow, Corp., except where otherwise noted. All Rights Reserved.
Resources, Advice & Tips for Covid-19
Read More
Do Betta Fish Recognize and Interact With Their Owners?