Betta flaring is a display of flared gills and occurs when the fish senses a threat. This flaring behavior is common among male bettas when the fish defend established territories or mating partners. Fortunately, the fight is mostly limited to displays of flaring and spread fins.

Betta flaring is perfectly normal, but the behavior is not always an expression of anger. When a betta flares, this may also be your fish stretching its muscles. With that in mind, fish keepers typically see bettas flare when two males fight with each other. For example, the betta splendens, or Siamese fighting fish, are selectively bred to be aggressive, and flaring helps the fish appear larger than life.

Betta fish detect color visually and may easily spot a male betta. Many fish keepers think the male betta is looking for a fight, but conflict is the last resort.

Bettas in the Wild

The confrontations between two male bettas in the wild rarely end in death. One male usually retreats in defeat. The confinement of a home aquarium presents different challenges as the habitat is small, and there are not many escape routes for the fish. The general rule is only one male betta per aquarium in case the two fish are overly aggressive.

If a male sees his reflection in a mirror, the betta responds by adopting an aggressive posture. There are many other reasons bettas flare gills, and sometimes this behavior may happen after a water change! 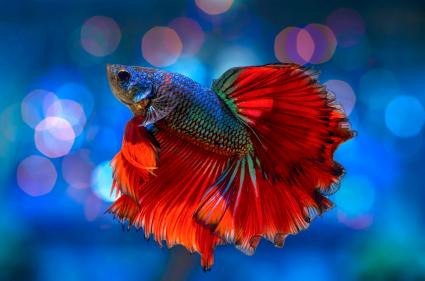 This showy ritual is what Siamese fighting fish are known for, and modern strains are far more belligerent than wild bettas. The fish initially try to deter one another with ritualized displays. The bettas raise fins and flare gills to make themselves look more prominent.

Threats in the Environment

Betta fish need suitable tankmates, or the environment may collapse. New hobbyists must watch the community to ensure the betta is not chased, or a fish does not try to nibble on the beautiful fins. The betta's gills may flare from stress. Hobbyists need to observe tank behavior closely to ensure minimal flaring behavior occurs. 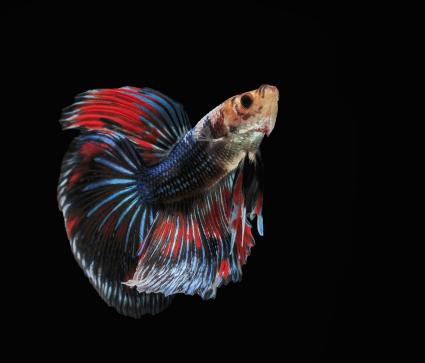 The fins and gills help propel bettas through the water. Every once in a while, the male betta needs to stretch its muscles. This behavior may be a form of exercise for your fish, but too much is harmful. More than 20 minutes a week is a problem.

You may clean the tank and do a water change once a week. If you notice after you return your betta to the tank it flares at you, don't panic! This behavior rarely happens, but your fish needs to get to know you. Spend less time with your fish for a few days as you are the threat. Your betta needs to settle down a bit.

Even though male bettas fight, a single male betta rarely bothers other fish in the aquarium. If you want to add tank mates for bettas, there are peaceful species to consider.

Female bettas fight with each other on occasion, but it is a rare occurrence. Every once in a while, a little fin nipping may happen among females.

Bettas Flare-up for Many Reasons

Stress, environmental changes, and when a male encounters another male betta are the main reasons a fish keeper may notice ritualized displays. This gill flaring behavior is perfectly normal, and a fish keeper needs to follow simple rules to ensure the community tank remains peaceful. One male betta with select tank mates lives a healthy and happy life. Hobbyists need to watch the betta's behavior to ensure the fish is left alone and stress is not part of the equation. Make sure to eliminate any mirrors.

0
Comments
© 2006-2021 LoveToKnow, Corp., except where otherwise noted. All Rights Reserved.
Betta Flaring: What It Means and What You Should Know