Chickens were once thought of strictly as farm animals, but as more cities allow backyard chickens, these birds are now being kept for their pet potential, as well as their eggs. The following recommendations of the best chicken breeds for pets are based on keeping pet hens, since roosters are naturally more aggressive.

Some owners prefer a smaller breed depending on how much space they have available. They may also find the smaller breeds easier to handle for their first pet chicken.

Silkies are one of the best chicken breeds to keep as pets. They are also one of the cutest chicken breeds. Their soft feathers feel almost like hair, and their fluffiness makes them look more like a Muppet than a chicken, which really makes them appealing to children. According to Cackle Hatchery, some Silkies have "beards" which almost totally obscure their faces, while others are beardless. These chickens are also unusual because they have naturally black skin, bright blue earlobes, and a fifth toe on each foot.

While keeping a chicken indoors is not recommended since you really can't house train them, this breed is probably the best choice for at least bringing into the house occasionally.

This bright was originally created to an "ornamental chicken" and hence they're not a good choice if you're looking for a frequent egg layer. However, they're beautiful birds and make excellent pets, especially with children. They also are a breed where the males and females have the same feather patterns and colors. 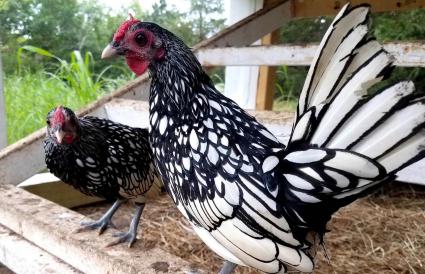 Certain breeds are known for having outgoing personalities and appear to enjoy interacting with people. Some chicken breeds even enjoy cuddling! These breeds are great options for people looking for the best chickens for pets.

Standard Brahmas are one of the largest chicken breeds, and even bantam Brahmas are larger than many other bantam breeds. Their profuse feathering makes them exceptionally cuddly. They have small pea combs and feathered legs and toes. 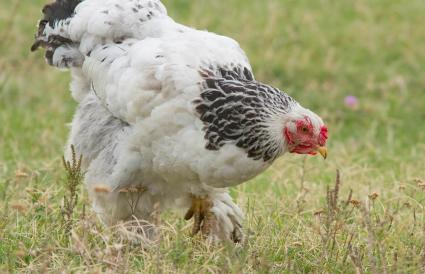 According to Meyer Hatchery, Cochins are one of the fluffiest friendly chicken breeds, and their thick layers of feathers and down make them appear larger than they really are. These single-comb chickens also have feathers on their feet, so clean and check them every week to make sure they don't develop sores or exceptionally scaly skin that might indicate a mite infestation. 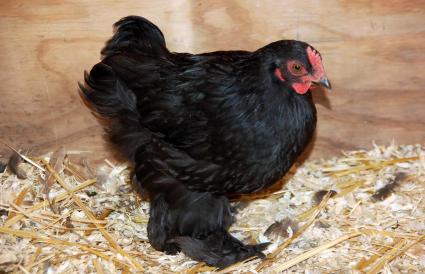 Bantams of this breed might also make good, sometimes-indoor pets with constant supervision.

The Speckled Sussex is a fairly large and beautiful chicken. According to My Pet Chicken, it has a single comb, and its feet are free of feathers. Hens of this breed tend to go broody, which means they will try to incubate their eggs even if there isn't a rooster around to fertilize them. Still, they are one of the friendliest chicken breeds due to their nice personalities and make good pets. Just be sure to check the nest box and coop each day and remove any eggs right away.

According to Cackle Hatchery, Easter eggers are not a true breed. They are incredibly popular hybrids of Araucana and Ameraucana chicken heritage that are particularly prized for the unusual colors of their eggs. These chickens have pea combs, feather "beards," and feather-free feet. They're great egg producers, and they don't appear to mind being confined so they're very easy to care for. 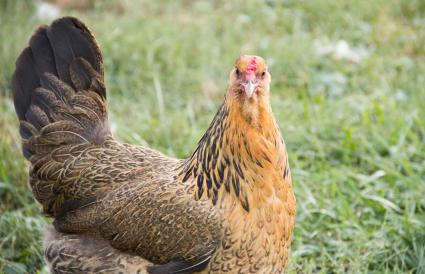 Docile Chicken Breeds That Are Quieter

Any bird owner can tell you that birds are generally known for being noisy. Some chicken breeds tend to be quieter than others which makes them good choices if you're in an area with a lot of neighbors.

According to the Livestock Conservancy, Orpingtons were created by breeding Minorca roosters to Black Plymouth Rock hens, and then breeding their offspring to Langshan chickens. Orpingtons are good-sized chickens with single combs and clean feet. 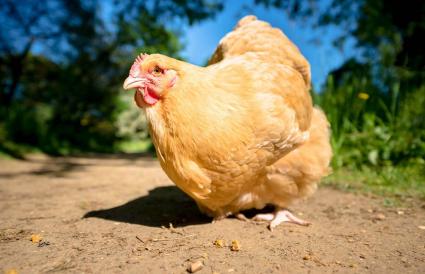 Polish chickens will definitely stand out in your yard with their unusual feathered "cap" that fans out over both eyes and their heads. It's this unique feather arrangment that led to their alternate name of "Top Hats." They can also have beards for a truly full-feathered facial appearance. These chickens are great for beginners because of their gentle nature. You may find you need to trim back their top hat feathers if they have issues with seeing correctly. 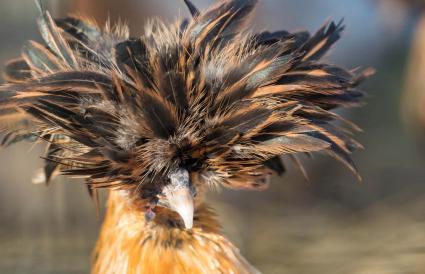 While there are several chicken breeds that are friendly, some are particularly good with people. Any breed that is known for being good with children is an excellent choice for beginners.

According to Meyer Hatchery, the Faverolle is a gorgeous, single-combed, French breed with extremely full feathering, as well as a beard, ear tufts, and feathers on the legs and feet. Holding one feels like holding a warm pillow. Faverolles are also one of a few breeds that actually have five toes on each foot. 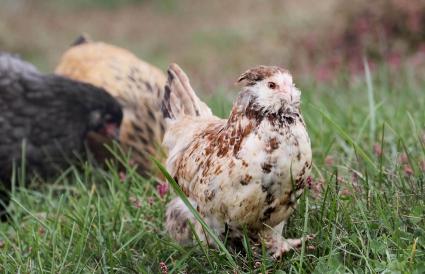 According to My Pet Chicken, Wyandottes are heavy-bodied chickens with small rose combs that resist frostbite in the winter. These chickens also have nice, fully bodies of feathers that come in amazing colors and patterns that are really breathtaking, especially in a mixed flock where they truly standout. Think of them as showgirls of the chicken world.

As you can tell from their name, the Rhode Island Red is the official state bird of the state. Rhode Island Reds are a great beginner choice as they're fairly hardy and easy to take care of. They can be very gentle with people and children although if you don't spend enough time with them as they grow up they can be more standoffish. 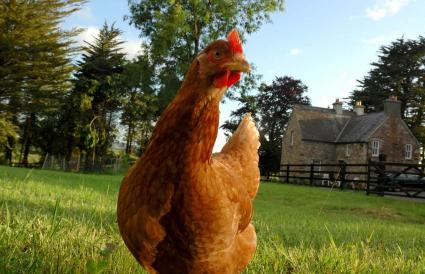 The Jersey Giant makes a good beginner choice for a pet chicken because their friendly and laid back not only with people but with other chickens as well. They also can get along well with other pets. They are impressive when full grown and though they have nice personalities, they may not be good with small children because they will be too big to pick up and carry around. 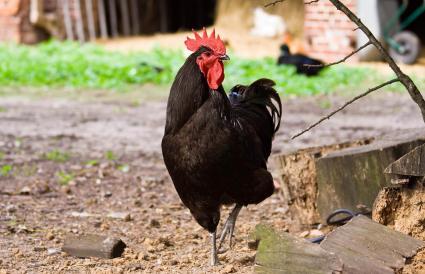 Having chickens as pets is favored not only for spending time with these engaging creatures but also for the benefit of fresh eggs! Certain breeds produce more eggs than others, so if you're thinking about keeping chickens with an eye toward egg production, you should consider one of these breeds.

According to Cackle Hatchery, Australorps are some of the most prolific egg layers. They have single combs and no feathers on their feet. These chickens are considered Australia's national breed, according to the Australorp Club of Australia. 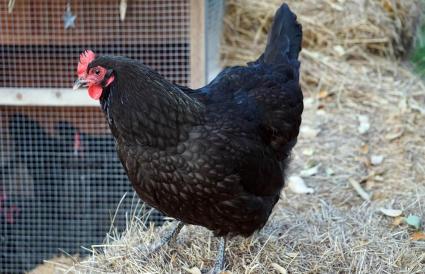 Simply known as Barred Rocks, these chickens are a variety of Plymouth Rocks, and they're very good egg producers. According to My Pet Chicken, they have single combs and unfeathered feet and legs. Barred Rocks are visually stunning with their bold stripes and red combs and wattles, so they are also standouts in any backyard flock, just like Wyandottes. 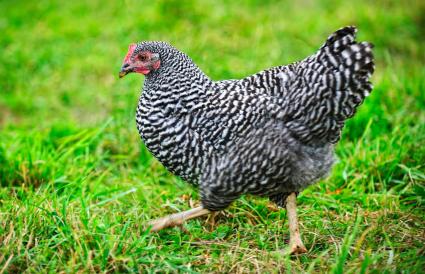 Leghorn chickens have a reputation for being very intelligent, although they do not always have the best temperament to be pets. They can be skittish and do not crave human interaction in the least. They're a great choice as an egg layer but not particularly as a pet. 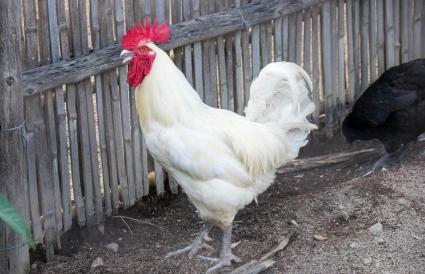 This chicken breed is a hardy chicken that is a great choice for someone who wants a friendly bird with excellent egg-laying capabilities. They like people and even do well around other types of pets. They are also a good choice if you have a smaller space, as they don't have the larger space needs of other breeds. 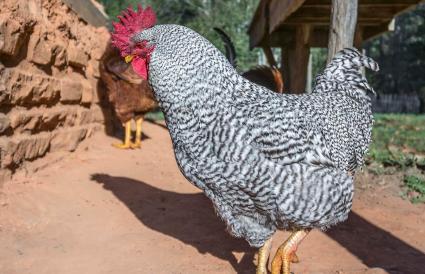 Roosters can have a reputation for being aggressive, although they actually can make excellent pets. Roosters that have been handled since birth and become used to humans are much more likely to be friendly with people. It's not unusual for them exhibit pushy behavior as they reach maturity but with some training they can learn to temper that behavior around you and other people. On the other hand, taming an adult rooster that has not been handled may prove difficult and these birds can be unappealing pets. Rooster temperament will also vary by breed, as some breeds are known for being more aggressive than others. They also can be quite loud, so you may want to think twice about having a rooster if the daily crowing will annoy your neighbors.

Bringing Out Your Chicken's Pet Potential

Although the breeds mentioned above have some of the greatest pet potential, many hens can be tamed if you work with your chick from the time she comes home.

Training Chickens to Be Friendlier

In addition to working with your chicks to get them used to human handling right away, provide them with treats often to make them associate you with the best things in life. You can also work up to hand feeding them to increase their ease with being around you up close. In the beginning, you may want to keep them from foraging in the yard, as you want them to only get food from you, and gradually allow them to forage more as you establish a close relationship with them. Treats that chickens will really enjoy include fresh berries, live meal worms, cooked oatmeal (with milk, not water), raw or cooked plain fresh pumpkin or low fat or non-fat yogurt.

Where to Buy Pet Chickens

Pet chickens are easier to come by than you may realize. You can buy them both locally and online.

Local farmers sometimes have extra chicks to sell, and Tractor Supply Company sells chicks in their stores during their annual Chick Days celebration every March through April. Bins are marked either as pullets (hens) or straight run, which means you could get a pullet or a rooster, and you won't know which until the chick matures.

Meyer Hatchery, My Pet Chicken, and Cackle Hatchery are three online sources for chicks. Unlike many hatcheries that require you to buy as many as 15 to 25 chicks at a time, you can order as few as three standard chicks or, with the exception of Cackle Hatchery, five bantam chicks, and they don't all have to be the same breed. Note that My Pet Chicken is the only hatchery that offers sexed bantams.

Keep in mind that since these are live animals, there aren't always enough hatched chicks to supply the demand, which can be disappointing. Be sure to pick out a couple of substitute breeds in case you're notified your order can't be filled as requested.

Be Sure You Really Want a Chicken

It's easy to get swept up in the moment when you're looking at a cute little chick or a beautiful adult chicken, but chickens aren't the ideal pet for everyone. Do your homework and make sure you can provide proper living space for your pet, and that your municipality allows backyard chickens. Once you've done that, try to visit someone that has pet chickens so you can see what they're really like, and then you can decide if this is truly the right pet for you.

Comments
© 2006-2021 LoveToKnow, Corp., except where otherwise noted. All Rights Reserved.
Pet Chicken Breeds Known for Being Friendly and Docile