Parakeet breeding isn't very difficult, but there are things you should know before setting up a male and female pair. Get tips on the best diet to feed, choosing the right cage and parakeet nesting box, and caring for the parakeet babies until they're weaned.

How Do Parakeets Mate?

Always select completely healthy birds with no deformities. Beyond that, there are several basic steps to pairing parakeets for breeding.

1. Determine if You Have a True Pair of Parakeets

Almost any two parakeets will bond if they have no alternative, so what may appear to be a breeding pair may just be two females or two males. Luckily, these birds are sexually dimorphic, which means you can determine the sex of each bird by its appearance.

2. Parakeets Must Bond to Breed 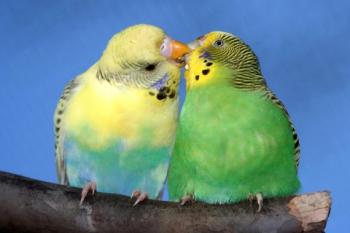 Bonding must take place before a true pair will breed. Sometimes the birds will pair up on their own out of a larger flock, but if you want to breed selectively to produce specific colors and patterns, you can select the male and female you want to pair. Ideally, you'll pair juvenile birds and let them grow up together, but it's still possible to pair adult birds.

Set up your intended pair together in a roomy cage and give them time to get used to living together. Once they bond, you'll see them sit next to each other on the same perch and follow each other around. Eventually, the male will begin feeding the female. When you see that, they are truly bonded.

3. Wait for the Parakeet Pair to Reach Maturity and Breeding Condition

Parakeets are usually mature enough to breed about one year of age. When the hen develops a brown, crusty-looking cere, that's the best time to set up the nesting boxes for your parakeets.

According to South Coast Pet Hospital, there are two main practices for breeding parakeets: colony breeding and breeding individual pairs.

Colony breeding involves setting up several pairs in a large flight. The flight should be about 6' L x 3' W x 4' H, with wire spacing of no more than one-half inch. You should provide a nest box for each pair, plus one extra nest box to prevent fighting, and all the nest boxes should be hung at the same height near the top of the enclosure.

While colony breeding may provide some convenience, such as having one area to clean and ensuring your pairs get enough exercise, it also has some drawbacks.

It's much easier to control the situation if you give a single pair of parakeets their own space for breeding.

Having the correct kind of set up will encourage your birds to breed. Make sure you have the following items.

According to the Hamilton & District Budgerigar Society (HDBS). the cage you select for a single pair should measure approximately 24" L x 12" W x 16" H, and it should have a separate door where you will attach the nest box to the outside of the cage so the birds can enter it from the inside of their cage. The cage should have several perches, and one should be placed close to the nest box opening so the chicks can reach it easily when they are old enough to leave the box.

You'll need to hang a mineral block and cuttlebone from the side of the cage to provide the female with extra calcium for making egg shells. There should be dishes for food and water, as well as an extra dish for fresh and soft foods. 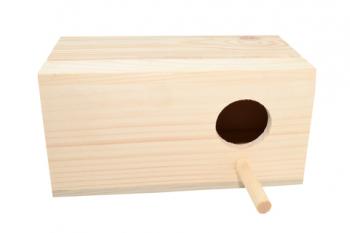 Nest boxes come in many sizes and designs, and they're usually designated for specific breeds so you should select one marked for parakeets. HDBS recommends a nest box with 1 1/2-inch hole for the birds to use as a doorway. If possible, choose a rectangular box with the opening at one end, and a circular recess in the floor on the other side for the eggs. The box will either have a lid on top or on one of the sides so you can check for eggs or hatchlings.

There are different types of nesting material available, so you may have to try a few before you find the type your pair likes best. Safe choices include aspen shavings and recycled newspaper. Even shredded newspaper is acceptable, but do not use cedar shavings because their fumes are toxic to birds.

Don't be surprised if your pair pushes all the nesting material out of the box.. Parakeets are notorious for liking a bare box.

Parakeets need about 12 hours of daylight and 12 hours of darkness and rest under normal conditions. They tend to come into breeding condition when the days are longer, so it can be beneficial to extend their daylight by a couple of hours using full-spectrum lighting. The light is also necessary to help females synthesize vitamin D so they can produce strong egg shells and bones.

The two keys to a breeder diet are variety and abundance. If your pair has an abundance of healthy food, they are more likely to go to nest. Soft foods are especially helpful for bringing a pair into breeding condition, and the pair needs soft food to feed the chicks as well. Feeding these foods before breeding helps ensure your pair will eat them readily once the chicks hatch.

This diet should include:

Throw away old soft and fresh foods after two to three hours and replace it with fresh so the birds don't eat anything that's spoiled.

Once your pair is settled into their breeding set up, it's usually only a matter of time until they begin to breed. Stop all training if you've been working with them previously, but still provide them with basic care such as fresh food and water and empty their bottom tray to get rid of their droppings.

When the female is ready to be bred, she will lean forward on the perch and raise her tail slightly. The male will position himself over the female and begin rubbing his vent against hers in order to deposit his sperm. He may breed her several times a day, and the female will begin laying an egg every other day. The average clutch is usually about four to five eggs. The video below shows courtship behavior prior to an actual breeding.

Eggs aren't always fertile, but you can attempt to check them by "candling" them about a week after the female begins sitting. Gently pick up each egg and hold it in front of a strong flashlight. If you can see a yellow glow with red squiggly lines inside, the egg is fertile. If you only see the yellow glow, the egg is most likely infertile. You may see faint outlines as the chicks develop, but the eggs will become rather opaque with a clear air space on one end as the chicks get closer to hatching.

Note that even though you can check for fertility, it's usually best not to disturb the expectant mom too much or she might abandon the nest.

Caring for the Baby Parakeets

You have two choices for raising parakeets after they hatch. Either let the parents raise them, or hand feed them yourself. However, they will make tamer pet birds if they get used to being handled.

Parakeet chicks are quite small and can be difficult for anyone but the most experienced breeder to hand feed. Many breeders opt to let the parents raise the chicks through weaning and just handle them daily once they are 14 days old in order to hand tame them.

The male usually feeds the female because she will only come out of the nest to relieve herself and get a drink. She will then feed the chicks although some males will also help with feeding.

Hand feeding involves pulling the chicks from the nest box at 21 days old. They'll need to be placed in either a commercial incubator or a homemade one in order to keep the chicks warm until they have a complete set of feathers.

At 21 days old, the chicks will need to be fed a special formula via a pipette or small syringe approximately every three to four hours as their crops empty. Commercial formulas like Lafeber Instant Nutri-Start or Kaytee exact have complete directions for mixing their formulas, as well as how often to feed the chicks as they grow. The food is typically fed at a temperature of 105 degrees Fahrenheit. This temperature ensures you won't burn the chicks' crops, but it's still warm enough for proper digestion.

As the chicks grow, they will eventually go longer between feedings and require fewer feedings per day, especially when they begin eating on their own.

Weaning typically begins around five to six weeks of age while the chicks are either still being fed by the parents or you're still hand feeding them. You'll need to begin offering a variety of foods so the chicks learn to accept a healthy diet instead of just becoming seed eaters.

Once the chicks are completely weaned, it's time to take them to an avian veterinarian for a well bird checkup before they go to new homes.

Some pairs don't know when to quit and will continue producing one clutch after another. All this egg laying and feeding chicks will exhaust the hen and could lead to her death. Allow the pair to produce two clutches at the most and then encourage them to stop. You can use these methods for single pairs or adapt them for a colony breeding situation.

Since breeding activity is stimulated by longer days, limit their daylight hours for several weeks. This is easily done by draping the cage with a dark cover after they've had eight hours of daylight. Remove the cover first thing in the morning and repeat the process daily.

At the same time, remove the pair's nest box and any hanging toys such as coconut houses and similar items. The hen is less likely to lay if she doesn't have an ideal place to nest.

If needed, move the hen to a separate cage. Lack of access to her mate and the distraction of new surroundings should help her move out of breeding mode.

Be a Responsible Breeder

Breeding parakeets can be a wonderful hobby, but keep in mind that you're working with live birds. First, ask yourself if you're prepared to keep the chicks you produce if you can't find good homes for them. If your answer is yes, you can try breeding one or two pairs to see if this is really the hobby for you. If your answer is no, just enjoy the parakeets you have, and give them the very best care you can.