There are several common signs of illness in pet birds that can indicate they are very sick and dying. Like many other small pets, birds will hide their symptoms until they're in serious condition and may be beyond medical help. Knowing what are the signs of a bird dying is information any responsible bird owner should learn.

How to Know When a Bird Is Dying

Regardless of the type of pet bird, the common signs of sickness and dying are the same. A bird can fall ill and die in a short amount of time, so contacting your avian veterinarian if you see any of these signs without delay is critical to potentially saving your pet bird's life. It may seem odd to you as a pet owner that an animal would "hide" illness and pain but from the bird's point of view, this is an instinctual behavior to protect them from predators in the wild, since the sick and weak are more likely to be victims.

Birds that are sick and dying tend to have a puffed up appearance to their feathers. Puffing up their feathers is a normal behavior for birds, especially when they feel a draft coming on or during sleep time. However, they should not do this behavior continuously. If your bird is staying puffed up for long periods of time, they may be dealing with a fever and fighting off an infection.

Another sign that a bird is sick and dying associated with their feathers is their general appearance. If the bird is losing feathers, and you notice that their underlying skin looks scaly or dry, they may have a parasitic infection. The feathers may appear discolored and dull and lose their vibrant colors, and the edges may appear disheveled. Some bird species can also develop cysts from their feathers that have become ingrown, and these can be harder to see without feeling the bird for lumps on their skin. Birds can also pick out their own feathers due to stress, and while feather destructive behavior is not fatal, it's a sign of a bird in severe distress.

Some birds will produce a discharge around their eyes, ears and their cere (by the nostrils) when they are very ill. These areas may also appear inflamed and swollen or discolored. 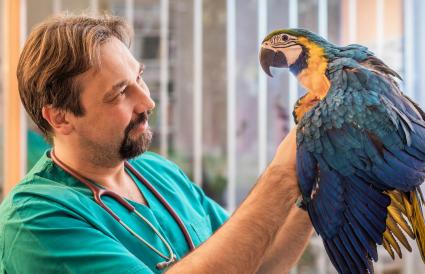 A pet bird that is ill and approaching death will shake and shiver all over, giving the appearance of being cold. Some birds will have much more dramatic trembling that can include falling and spinning when they try to move, which can appear to be seizures.

Wheezing, clicking noises, labored or rapid breathing are all signs your bird is very ill. You may also see them moving their tail up and down and stretching of the neck which are body movements they make to try to bring more air into their system. Open mouth (or beak) breathing is also a sign of difficulty breathing. Respiratory infections and air sac mites are common medical problems in many species of pet birds and can be fatal without immediate treatment.

Eating less or not eating at all is a definite sign that your bird is not doing well. If your bird is refusing food, and you notice that they are starting to lose weight, there's a good chance that they are dealing with a serious medical condition. You can tell if a bird is losing weight by either regularly weighing your bird with a small animal or baby scale, or by gently feeling around their breast area. If you can feel their breast bone, your bird is underweight. One thing to be aware of with many birds is that they will actually "fake" eating food to hide that they are sick, going so far as to pick seeds and pellets out of their food tray, which then fall to the cage bottom. If you see a lot of uneaten food on the floor of your cage, your bird may be very sick.

If your bird begins drinking excessively, this can be a sign of liver or kidney problems. Likewise, drinking much less than normal can indicate they're very ill, especially if they are also not eating. Changing in drinking should also accompany a marked increase or decrease in urination.

It's common for some species of birds to regurgitate their food for a variety of reasons, such as feeding their young and during the mating process. Vomiting is not a benevolent behavior, however, and is a sign the bird is very sick. You can tell the difference by the behavior of the bird prior to the food coming out. A regurgitating bird will not appear distressed and will move its head forward and "drop" the food out from its beak, whereas a vomiting bird will shake and tremble and make jerky head and upper body movements as the food comes out. Vomiting can be a sign of several lethal conditions such as liver disease and yeast infections, among others.

A sick and dying bird will show minimal movement and may also be very still with eyes closed and a hunched over position. Birds that may not be welcoming to handling normally may allow you to pick them up as they're too weak to fly off or move away from you. You may also see them sitting on the bottom of the cage instead of on a perch. Some sick birds will hang onto the side of the cage with their beak without using a perch at all. If you do see them moving, they may appear to lack coordination and balance and a very sick bird can even fall off a perch. Some birds may not even be able to move, either because they are too weak or they are partially paralyzed. 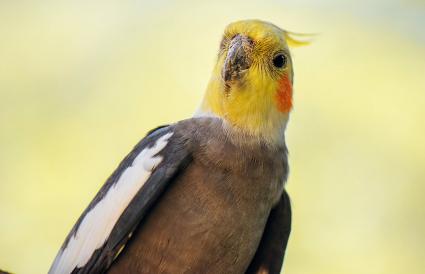 Changes in Feces and Urine

Any changes in the appearance of your bird's urine or feces can be a sign they are seriously ill and dying. If you have trouble seeing your bird's urine and feces because of the cage liner you use, replace it with something that will make it easier to see, such as a few pieces of white paper or a clear plastic sheet.

Most species of pet birds, from canaries to lovebirds to parrots, are known for making some type of regular noise throughout the day. From trilling and chirping to squawking and imitating sounds in their environment, it's rare to find these birds making no noise. If you have a bird that is regularly vocal and has become increasingly silent, you should have a medical professional examine your bird right away. It's possible your bird isn't medically ill and is stressed or depressed, which still requires immediate intervention to prevent these from affecting their immune system and leading to illness.

Recognize the Signs a Bird Is Dying

Caring for a pet bird means making sure you observe their daily habits, so changes will be obvious to you as they start to happen. This includes changes in their eating and drinking habits, the quality of their feces and urine, and their general behavior and level of energy. If you notice any of the above changes, contact your veterinarian immediately as you may have less time than you think to intervene to save your bird's life.

0
Comments
© 2006-2020 LoveToKnow, Corp., except where otherwise noted. All Rights Reserved.
Resources, Advice & Tips for Covid-19
Read More
How Do You Know When a Bird Is Dying?