There are five diseases that strike oscar fish frequently and are easy to recognize, including hole in the head disease, ich, fin and tail rot, popeye disease, and bloat. Learn how to spot a sick oscar fish and determine which treatment it needs.

The exact cause for HITH has not been determined. However, one possible culprit is the flagellate parasite Hexamita. Other factors may play a role in the development of this illness, including vitamin or mineral imbalances, overcrowding, poor water quality, or improper nutrition.

Symptoms of HITH in Oscars 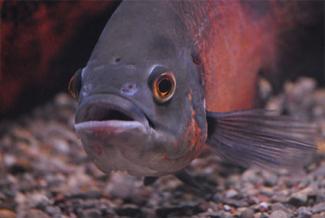 Some symptoms of HITH include:

This disease is fatal if left untreated. According to a case report in the Iranian Journal of Veterinary Science and Technology, this condition can be treated with a drug called Flagyl (metronidazole). This was added to the aquarium water, and the fish was left in this bath for about 24 hours. In the case report, the fish also received treatment with malachite green and formalin (also as a bath), but it is uncertain whether these steps are necessary.

Margaret A. Wissman, D.V.M., D.A.B.V.P. notes that metronidazole can be administered in a medicated fish food flake if your fish is still willing to eat. Treatment takes five to ten days. Alternatively, she recommends a bath in metronidazole for six to twelve hours.

There are no controlled studies of treatment methods for HITH disease. Since the disease may be partially caused by environmental factors, it is important to focus on correcting any of these husbandry issues as well.

Ich is a very common disease problem of all aquarium fish including oscars. It is caused by Ichthyophthirius multifiliis, a protozoan parasite. According to veterinarian Dr. Jessie Sanders, the organism causing ich has a complex life cycle and can reproduce rapidly, leading to a sudden onset of disease. The development of the parasite occurs more quickly in warmer water. It is most commonly brought into an aquarium by the addition of new fish, live plants, or live food items.

Symptoms of Ich in Oscars 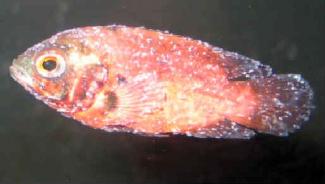 Some symptoms of ich include:

Ich is usually fatal if not promptly treated. Margaret A. Wissman, D.V.M., D.A.B.V.P. suggests that several treatment options are available, with a variety of protocols and dosing regimens. The following products can be used:

It is also helpful to increase the water temperature during the time that you are treating your oscar fish. The higher temperature will speed up the life cycle of the ich parasite and will decrease the time required for treatment. Some medications used to treat ich are toxic to invertebrates or to live plants. Read the label directions carefully or consult with your veterinarian about specific doses, or any special considerations for your aquarium. Some fish with ich will also suffer from secondary bacterial infections and may need an antibiotic.

Fin and tail rot is caused by a bacterial infection. There are mixed reports of which bacterial species causes this disease. Some possible bacteria include Flavobacterium columnarae, Cytophaga spp., Aeromonas spp., Pseudomonas spp., or Flexibacter spp. Like HITH, this disease is more common when fish are stressed by poor environmental factors such as overcrowding, low oxygen levels, or poor water quality. The infection can also occur in tissue that is first damaged by wounds or abrasions.

Symptoms of Fin and Tail Rot in Oscars 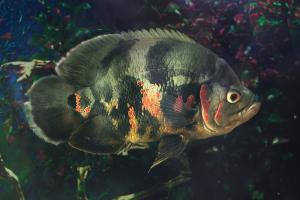 According to NippyFish.net, some symptoms of fin and tail rot include:

Treatment of fin and tail rot will usually require antibiotics. According to Dr. Erik Johnson, fish that are severely affected may require surgery to remove the worst of the infected tissue. There is some chance that the fins will regrow, usually with minor cases of fin and tail rot. Make sure to test for and correct any stressful factors that have contributed to your fish's illness.

According to FishTankTutor.com, some antibiotics available over-the-counter that can be used for this disease include:

Perform a 20 to 30 percent water change prior to treatment. It is also helpful to add aquarium salt to the water according to the package directions. This problem can be prevented by providing fish with adequate space and hiding places such as rocks and plants, and by testing your tank's water to ensure that it is healthy for your fish. 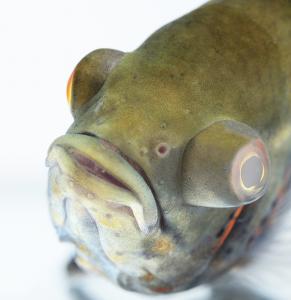 The symptoms of popeye disease include:

This problem has three components, which all need to be addressed when treating popeye disease:

Treatment of popeye disease can be difficult. According to AquariumLife.net, the following steps are needed:

Even if the treatment is successful in saving the fish, some Oscars will lose the affected eye if the damage was too severe. Most fish can adapt to being blind in one eye, but if your pet is blind in both eyes, you will have to pay extra attention to make sure that your fish is feeding adequately.

Bloat is a serious condition in oscar fish and can be caused by a variety of underlying problems. It is more of a symptom of disease than a single disease by itself. One simple cause for bloat that is particularly common in Oscars is overfeeding and constipation.

Symptoms of Bloat or Dropsy 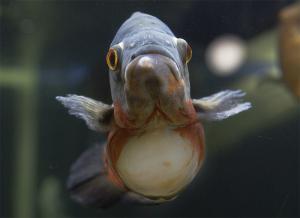 According to aquarium enthusiast Melody McKinnon, you can see several symptoms when a fish is constipated:

Constipation can be treated by withholding food, performing a water change, and increasing the water temperature by one to two degrees. Feed small pieces of peeled, softened, slightly cooked peas. If your fish does not improve, your fish may have dropsy, which is much more serious. According to OscarFishLover.com, symptoms of dropsy can include:

These symptoms can occur with a variety of medical problems, including organ damage, tumors, severe constipation, or an intestinal blockage. At-home treatment of dropsy is not often successful and many fish with these symptoms will die. Consult with your local veterinarian to see if anything can be done for your fish.

There's a common theme among most of these oscar fish diseases: keeping the aquarium water clean. You can follow these steps to help ensure a healthy aquarium:

Oscars are friendly and interesting fish. With careful attention to their water and food needs, you can prevent most of these diseases. If your oscar ever does become sick, hopefully quick recognition of the ailment can help you get him healed in no time.