It is easy to think that the hermit crab prefers life away from all other sea dwellers. The term "hermit" doesn't exactly evoke social interaction! It might surprise many animal lovers to learn that the hermit crab is very social indeed. In the wild, they live in groups of 100 crabs or more.

Animals of Land and Sea

People tend to think of hermit crabs as animals of the sea, but they actually live in several environments. Of the 800 plus known species of hermit crabs, nearly all of them live in the ocean. Roughly a dozen of the 800 species are considered semi-terrestrial in nature, spending their lives in both water and on land. One species resides in freshwater and is found only in Vanuatu.

The hermit crab is actually misnamed! They are not crabs in a true sense because they do not have a completely hard exoskeleton. While they have a hard exoskeleton in the front of their bodies, their tail is soft. The hermit crab uses discarded shells from other animals to protect the exposed part of its soft body. They are more related to the lobster than to other crabs.

Hermit crabs borrow the shells from other animals no longer in need of their protective coverings. When a new shell pops up, the little crustaceans will form a line, all waiting their turn to try the new shell on. They begin with the largest crab, who tries the shell on first. When a crab leaves his old shell, a smaller crab will be waiting in line to see if it suits him better. These are clever creatures for sure! 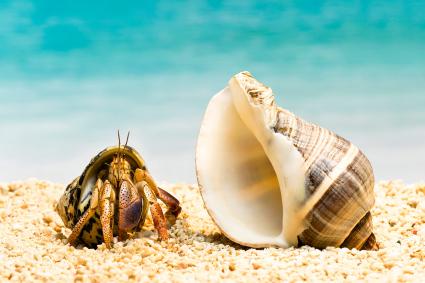 Hermit crabs will attach sea anemones to their shell and use their stinging tentacles as added protection to their being. They are so fond of having anemones around that they will even transfer them to new shells when they settle on a new home.

Humans and animals grow larger but are not known to shrink! The hermit crab breaks this rule and can actually reduce its size if need be. If a crab outgrows its shell but cannot find a larger one to use, it can decrease in size. It is too bad people didn't have that ability when their jeans got a bit snug.

Hermit crabs are not picky eaters in the least. They are opportunistic omnivores and will scarf down plants, like kelp, plankton, and seaweed, and dine on muscles, tube worms, tiny shrimp, sea horses, other crabs. They also feast on dead material, should they come across some. In the wild, their job is to dwell on the seafloor and help remove waste particles. 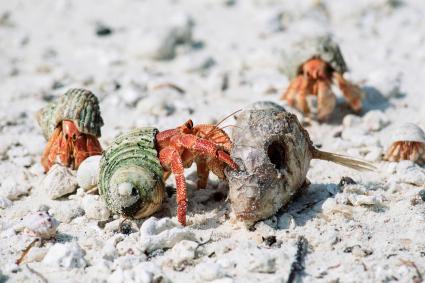 Hermit crabs are little animals that live a really long time! In the wild, the hermit crab can live for 5 to 15 years. The sea-dwelling creatures can live to be 25 years old and even upwards to age 40 and older! That is pretty old for a crustacean.

They Have a Fighting Spirit

Hermit crabs have a feisty, fighting spirit and have been known to throw down with other hermit crabs. When a hermit crab decides that he wants another crab's shell, he is willing to fight for it. It is common for a shell-jealous crab to start a fight with another crab in hopes of taking home the big prize, a new shell.

If you are considering purchasing a few hermit crabs in hopes of making them mom and dad and ending up with a hermit crab family, you'll want to rethink this plan. Hermit crabs are unable to breed in captivity. Any hermit crab that ends up in a pet store or in a home has come directly from its natural habitat. 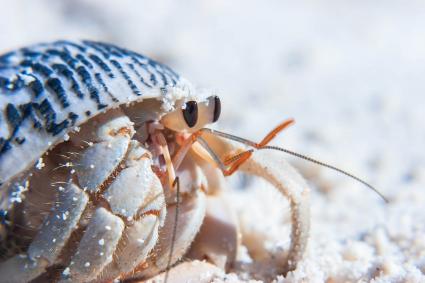 Hermit crabs have different-sized claws that do different jobs. The smaller claw is primarily used to collect food and get it to the crab's mouth. The larger claw's job is to help the hermit crab balance, hold on to things and defend itself from predators.

Animals That Belong in the Wild

Over the years, hermit crabs have become popular pets, but in truth, these are wild animals that belong in their natural habitat and not in cages. They have been designed to roam across large spaces, foraging for their food and their homes. Hermies also naturally live in large groups, not in a solitary, small space inside of a home. It is always best to admire hermit crabs from afar, not from the confines of a small terrarium.