If you've found a baby squirrel in your yard and can't locate the mother, it's reasonable to consider keeping the baby as a pet. However squirrels have many needs that lead them to being not the best choice of animal to keep as a pet.

Squirrels were actually quite popular pets during the 18th and 19th centuries but this practice began to die out in the early 20th century. Their popularity waned because squirrels, while adorable and intelligent, were difficult to keep as domesticated pets. There are several good reasons why squirrels should not be kept as pets.

Squirrels are born with sharp claws and despite their small size, they can cause quite a lot of damage to a person. As squirrels get older and reach social and sexual maturity, their behavior can change and they can become aggressive toward their owners. Even when a squirrel doesn't mean to harm a person, their sharp nails can hurt you simply by then walking or climbing on you. They can also attack your other pets, or be attacked and harmed by them.

Like many small rodents, squirrels have an urge to explore with their mouths and chew. This means they can easily destroy anything in your house, from furniture to drywall to your favorite households items. They need to be provided with a lot of appropriate chew items, not only to occupy their need to chew but also to keep their teeth healthy and filed down. Another aspect of their destructive behavior is that they like to keep their cages clean, so they will throw out any debris onto your floor. This includes food they didn't eat, the remains of chew items and even their feces. Since squirrels like a clean living area, you can expect them to urinate outside of the cage onto whatever is below and do the same with their poop. They can be house trained, but it's not as easy as training a cat or dog.

Along with their penchant for destructive behavior, squirrels also have a ton of energy to burn. You will need to provide exercise outlets for them daily and they need a big enough cage to roam around in that they don't get bored. The cage will also need to be escape proof as squirrels are amazingly good at acrobatics and breaking out of cages. In addition to an appropriate cage, they will need supervised time outside of the cage each day. 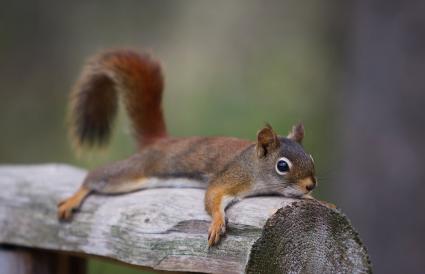 You will have a difficult time finding a veterinarian who will treat your squirrel if it becomes ill. You also cannot hire a pet sitter or board your squirrel if you need to travel. You cannot take the squirrel with you if you travel as they are illegal in many states.

Squirrels are not easy to feed and it's not like you can go to the store and buy "squirrel chow." Their diet consists of insects such as crickets, fresh fruit and vegetables, nuts, sunflower seeds, and calcium and magnesium supplements. They also can eat monkey chow biscuits and rodent blocks. If you don't prepare their meals in the right proportion a squirrel can very quickly die from malnutrition.

Legality of Owning a Squirrel

In many states it is illegal to keep a squirrel as a pet. Some states allow them but only with the possession of a wildlife permit. They are allowed in:

One of the biggest reasons to not have a squirrel as a pet is that they are wild animals who were not bred to be domesticated. Living in a household is an alien and unhealthy environment for them. Even taking in a baby squirrel to care for it with the intention of releasing it to the wild can harm a squirrel, as they become imprinted on you and lose their ability to fend for themselves. If you find a baby squirrel, the best thing to do is call your local wildlife rehabilitation facility or animal control and locate experts who can care for the baby properly until it's well enough to be released.

2
Comments
© 2006-2020 LoveToKnow, Corp., except where otherwise noted. All Rights Reserved.
What to Consider Before Getting Baby Squirrels as Pets