The trade in small exotic pets is thriving despite the restrictions often involved in owning one. If you're looking for an unusual pet to share your life with, the following exotic pets list contains some of the best exotic small pets to own.

Sugar gliders are adorable little tree-dwelling marsupials. Like a flying squirrel, they have thin membranes of skin on both sides of their bodies that allow them to take off from a higher point, and glide to another location.

According to Gliderpedia, gliders eat fruits and fruit juice, vegetables, and various sources of protein, including scrambled eggs and live insects. There is currently no single, prepackaged commercial diet for these creatures that completely meets their nutritional needs.

In captivity, gliders are usually housed in large bird cages, such as those used for large parrots. They require a sleep pouch, which you can hang from one of the bars, or they will also use a typical parrot nesting box.

Cons of Sugar Gliders as Pets

A young glider should be at least 12 to 16 weeks old before it leaves its mother and goes to a new home.

Bearded dragons are one of the easiest lizards to keep. They offer a great introduction to the world of exotic reptiles. 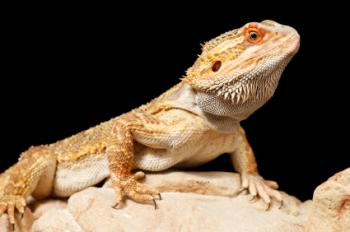 Bearded dragons need as much space as you can give them. Their habitat should ideally be tall enough to accommodate some climbing branches.

Cons of Bearded Dragons as Pets

Bearded dragons are readily available at many pet supply stores. You can also obtain them from breeders and rescues.

Hedgies, as they are affectionately known, are cute little animals that are covered in quills on top and have fur on their underside. They roll up into a spiny ball when they feel threatened, but with gentle persistence, you can teach them to accept handling. An adult hedgie only reaches about eight inches long on average. 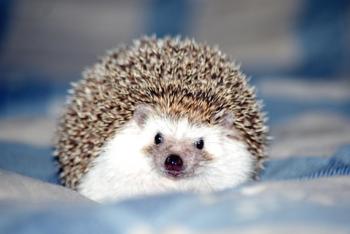 According to Hedgehog Central, hedgies are naturally insectivores that appreciate having some gut-loaded crickets and meal worms occasionally. However, many breeders recommend feeding them a low-fat, dry cat food that uses a named meat or meat meal as the main protein source.

There are a few hedgehog commercial diets on the market, but there's debate about whether they truly meet this animal's nutritional needs. The problem is that they often contain some of the same inferior proteins and fillers that are used in low-quality dog food.

Hedgehogs are very good climbers, so they need a deep habitat with a closed top, and about two square feet of floor space lined the with Aspen bedding.

Pros of Hedgehogs as Exotic Pets

Cons of Owning a Hedgehog

Tarantulas aren't every pet keeper's cup of tea, but some people find them fascinating. If you're not squeamish about spiders, you might like them, too. 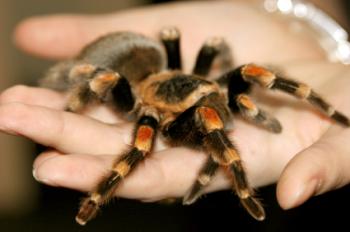 According to Tarantula Guide, these creatures will accept feeder insects such as gut-loaded crickets and meal worms. As a rule of thumb, the insect should be smaller than the spider's body.

Tarantula Cages.com recommends that spiderlings can live in clear plastic deli containers with ventilated lids, while 10-gallon aquariums with secure, ventilated lids make good homes for adults. Red knees like to burrow, so you should lay about three inches of coco fiber or peat moss in the bottom.

Pros of Owning a Tarantula

These cute crustaceans have been popular for decades. They actually live on dry land, so recreating a habitat for them isn't very difficult. 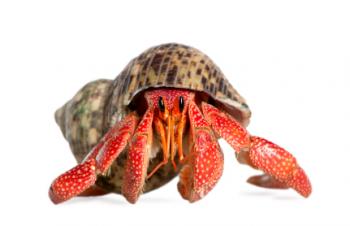 You can purchase commercial hermit crab diet at most pet supply stores. Additionally, you can offer you pets small pinches of fruits and veggies. These crabs will also eat the sea sponge kept in their tanks.

According to Doctors Foster and Smith, one 10-gallon aquarium is sufficient for two hermit crabs. You'll also need a secure lid to prevent escapes, and lighting is optional, but it can help keep the tank warm.

Cons of Hermit Crabs as Pets

Hermit crabs are readily available at most major pet supply stores. If you can't find them locally, you can purchase them online.

Don't Rush Into a Commitment With Small Exotic Animals

There's a certain allure to owning an exotic pet, something unusual that most other people don't have. However, there's a bit of risk involved if you don't take the time to really research the animal you're thinking of bringing into your home. Today's impulse purchase can all too easily become tomorrow's pet in need of a new home. Before you commit to an exotic pet, make sure it's legal to keep it where you live, and be sure you can provide everything that animal needs for as long as it lives.