If you're interested in buying a pet monkey, you're not alone. Small monkeys seem cute and cuddly and are attention-getters, but they are also intelligent and at times, even human-like. However, you should carefully consider all factors before you bring home a new simian friend.

Where You Can Buy a Monkey

Buying a pet monkey isn't as easy as strolling into your local pet store or contacting one of the many breeders for the type of dog or cat breed you want. These jungle animals haven't been fully domesticated yet, and even those that come from experienced breeders can be difficult to deal with. It is advised that you see pictures of the monkeys first and go pick up the monkey from the current owner. Here are a few websites to browse through to find the monkey for you, close to your home.

Types of Monkeys to Buy

Some types of monkeys are more popular as pets than others. Monkeys most frequently purchased as pets include:

For statistics on these types of monkeys as well as a few others, visit the Primate Store's Choosing a Primate Guide.

The Best Monkeys to Have As Pets

In general, monkeys, regardless of type, do not make good pets. They require a great deal of specialized care and constant attention because of their intelligence. If not given a proper environment to live and mental and physical enrichment, they can quickly become aggressive and destructive. They also are difficult to house train and will need to wear diapers for their entire lifetime. Monkeys, even the smallest ones, need large cages or habitats in order to thrive and many need to live with other monkeys or they will suffer from behavior problems due to lack of social interaction.

Be Cautious When Purchasing a Pet Monkey

Monkeys may look cute, cuddly, and like the perfect pet, but beware! Adult monkeys may not be the companion you were hoping for, as they can be strong-willed and intelligent enough to get into trouble. That's a far cry from the furry little baby monkey that made you want to scoop it up and take it home.

They may not like the other people in your life, and since they tend to be aggressive as adults, you may run into biting and other unpredictable behaviors. 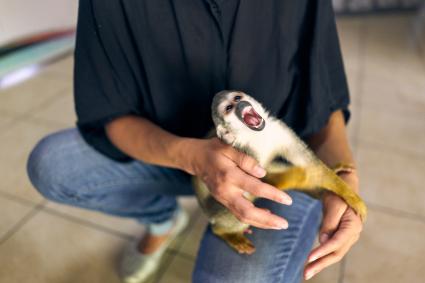 Care When You're Away

It's not as simple as kenneling a dog when you want to go on vacation for a while, plus when you're away at work just for the day, your monkey will need a companion.

It's not like in the movies. They aren't that easy to train. Although they are quite intelligent, you will find it much more difficult to train them compared to the average dog that is focused on working with you.

Many veterinarians won't treat monkeys. You'll need to find a vet who deals with exotic pets.

They're messy and destructive no matter how well you train them, especially as adults.

Monkeys need large cages of around 20 to 30 square feet or more, even tiny marmosets. They need a lot of branches and areas they can climb and swing in order to engage in natural behaviors. They'll also need a lot of vegetation to approximate their natural habitat. Finding the room for a cage and keeping the items inside clean and in good condition is a huge time commitment, as well as costly. 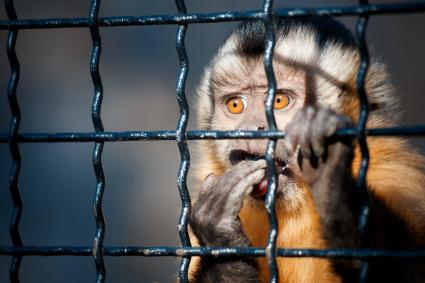 Monkeys can also be a risk for you getting zoonotic diseases such as Herpes B which is found in macaque monkeys. Monkeys can also transmit measles to humans, among other diseases.

Is It Legal to Own a Pet Monkey?

It may be illegal in your state to own a pet monkey. Even if your state allows you to own one, your local county or city may have laws requiring permits or banning them within the city or county limits.

How Much Does It Cost to Own a Monkey?

They are expensive to buy (usually between $7,000 and $8,000)-and keep. The Primates Sanctuary estimates the cost of owning a monkey over the course of its lifetime to about $50,000 to $60,000 because they need a varied diet and lots of enclosed space to play both indoors and out.

Things to Consider Before Buying a Pet Monkey

Jungle Friends Primate Sanctuary in Florida takes in monkeys that are relinquished as pets from owners who either could not handle their care or had them illegally. They have a list of incidents on their website of aggressive behavior of monkeys toward people, including their own owners. The sanctuary strongly urges people thinking of buying a monkey to understand about the dangers of owning a monkey, as well as the negative effects of attempted domestication on these wild animals. Think very carefully before you decide to buy a monkey, because of:

Being a Responsible Monkey Owner

When you're buying a pet monkey, proceed with caution. Make sure it's legal to have one in your state, then prepare your house as if you're having a toddler come and live with you. From there, when you're looking for sellers, make sure you have pictures of the monkeys upfront, then inspect the monkey before you pay for it. A monkey as a pet is a large investment financially and emotionally, so you should make sure he or she is healthy at the time of purchase.