The boa constrictor is an interesting snake that differs from other types of non-constrictor pet snakes. Despite their size, they are relatively easy to keep as pets, and are amenable to being handled by people.

The boa constrictor is a beautiful snake with a docile, calm temperament. Though people often think of them as one of the larger snakes on the planet, they actually are more in the medium range of sizes. 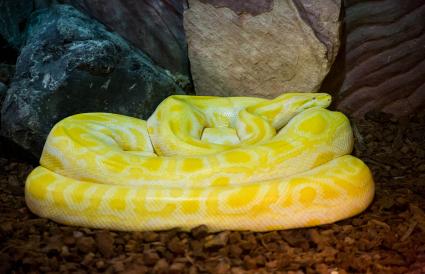 Facts About a Boa Constrictor's Diet 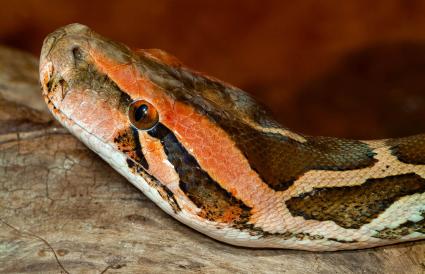 Boa constrictors usually have a calm nature and make good pets. There are several factors to take into consideration when choosing a boa as a pet. It is best to choose your snake from a professional breeder. You want to purchase a good, healthy snake, so look for the following signs:

Caring for a Boa Constrictor's Habitat

In order to keep your boa constrictor healthy and happy, it's important to have the right kind of habitat for them and ensure their temperature needs are met.

Habitat for a Pet Boa Constrictor 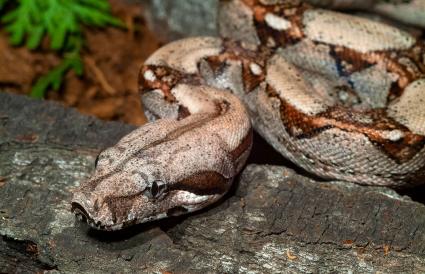 A variety of substrates will work well, but avoid using wood shavings such as pine or cedar, since they can become lodged in the digestive tract and cause health issues. Choose one of the following substrates:

Snakes need external sources of heat since they cannot regulate their body temperatures. In the wild, they use the sun for this purpose. When keeping a boa constrictor as a pet, you will need to maintain a proper temperature in your snake's habitat. The snake needs to be able to move from warmer to cooler areas of the enclosure. During the day the temperature in the main part of the habitat should be between 80 to 85 degrees Fahrenheit, with a basking area of about 95 degrees. Temperatures at night should be between 75 to 80 degrees Fahrenheit. There are several ways you can heat and maintain the temperature of the habitat. Heat the enclosure with:

Heat lamps and ceramic elements can be mounted to the top of the enclosure to direct heat downward. Heat tape or adhesive pads can be placed on the underside of the glass enclosure.

In addition to their temperature requirements, you need to maintain the right level of humidity in their aquarium. An ideal range is 60 to 75% which can be achieved with misters and a bowl of water in the tank. Your bowl should be one that is too heavy for the snake to knock over and ideally large enough for the snake to move its body through to cool off. Water should be cleaned and replaced often though as boas have a tendency to urinate in their water bowls.

Boa constrictors do not require UV (ultraviolet) light to maintain their health, but you can use a light if you want. If you choose to use light, use full-spectrum lighting or a low-watt incandescent bulb during the day. Place the lighting in a way that the snake does not come into direct contact with the bulb. Snakes can be seriously burned if lights are placed incorrectly.

What to Feed a Boa Constrictor

Boa constrictors are carnivores and eat live prey. Typical food choices for a pet boa constrictor are mice, rats, chicks, and even small rabbits. Pet boa constrictors can eat pre-killed prey such as rats and mice. A good rule of thumb to remember when feeding is that the prey should be no wider than the widest part of the snake's body. Always provide your boa with a clean bowl of water.

How Often to Feed a Boa Constrictor

Boa constrictors can be fed once a week to a couple of times per month, depending on the age of the snake. Baby boa constrictors grow faster than adults, so they require more frequent feedings. 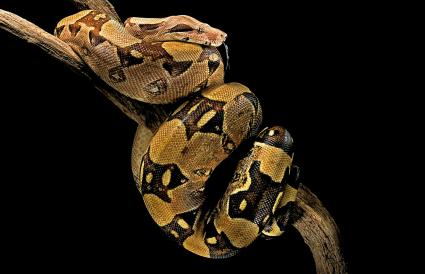 It's best to use reptile tongs to feed your boa constrictor, as you do not want the snake to confuse your hands with the prey. This can lead to bites as the snake's vision is weak and it may confuse the heat coming from your body with the prey and bite you by accident. It's also very important to wash your hands thoroughly after handling their food as the scent can confuse them as well.

While boa constrictors are not dangerous to adult humans, they can bite if they feel stressed or startled or during shedding season when they are irritable. Though they are a non-venomous snake, the bite can still be quite painful. Care should be taken to not allow children to handle boa constrictors as there is a risk of the snake getting around a child's neck and constricting if the snake feels stressed and uncomfortable. It's also a good reason to never let a boa constrictor wrap around an adult body as well. You should also avoid handling a boa constrictor after it has had a meal as there's a chance it will regurgitate its meal.

Veterinary Care for a Boa Constrictor

A new pet boa constrictor should go to the veterinarian for an initial examination, then follow up with routine visits to maintain its health. Boa constrictors can become infested with parasites that could eventually be fatal. Some infestations can also be transmitted to humans, so it is important to always cleanse your hands after handling your pet or its habitat. Boa constrictors are also susceptible to respiratory conditions and skin diseases. Boa constrictors can live 20 to 30 years in the wild, so with proper care and maintenance your boa can lead a long, healthy life.

Boa constrictors are classified as exotic pets, and there are laws that vary from state-to-state regarding the ownership of exotic animals. For example, Florida requires boa constrictor owners to have a permit, while Pennsylvania has no specific laws regarding reptiles. Each state has different laws, so before getting a boa constrictor to keep as a pet, you should contact your local game commission or city or county animal control department to find out the legal aspects of ownership. Certain large constrictor snakes are prohibited by the U.S. Fish and Wildlife Service Lacey Act in Florida, but the boa constrictor was not included in the 2015 law.

Boa constrictors are definitely on the larger side when it comes to pet snakes, but they are generally calm and docile. They make a great pet for an owner capable of handling a snake of their size and able to provide a large enough habitat with proper temperature and humidity controls.