The betta fish is known for its incredible beauty and its warrior-like personality, but there are certain facts about the betta that make it a fascinating pet. Delve deeper into this fish's world and learn a few of its secrets with this great betta fish information.

Fact One: Bettas Breathe Above and Below the Water

Unlike most fish that only breathe by collecting oxygen from the water through their gills, the betta can breathe below the water's surface as well as from above it. Bettas have an organ called a labyrinth located just behind their heads that allows them to breathe air. They can rise to the water's surface and take a gulp of air and then swim back down as they please.

In the wild, bettas live in very slow-moving waters with less-than-ideal amounts of oxygen. The labyrinth evolved to help these fish collect enough oxygen to survive. Of course, bettas still need to live in the water even if they can breathe regular air.

Bettas will pick at almost anything you feed them, but they primarily need protein. You can keep a pet healthy on a main diet of betta pellets, but your fish will also appreciate the occasional meal of live or frozen brine shrimp and freeze-dried bloodworms. Feed your pet daily, but no more than three pellets at a time and any other remaining food in the tank must be removed after five minutes. Bettas are prone to constipation, so some hobbyists recommend that you let your betta fast one day a week.

When you visit an aquarium shop, you'll notice that bettas are mainly displayed in small, individual containers. If you see one in a community tank, it's most likely the only one of its species. That's because bettas are highly territorial toward one another, and they will fight all the way to the death to defend their territory, if necessary. They don't appear to be quite as territorial toward other species, but they will still nip their tank mates occasionally.

Females are territorial, but not quite so fiercely territorial as males. For this reason, you can keep them in what is referred to by hobbyists as a sorority tank. It's recommended that the group is no smaller than five females, and the tank must provide at least a minimum of one gallon of water per fish. It's best to introduce the females all at the same time. They will have a number of spats over the first 24 to 48 hours until they determine their individual territory, and then they tend to settle down. Any fins damaged during these skirmishes typically heal in a few weeks. Make sure the tank has plenty of plants to provide the girls with places to have a quiet retreat.

Bettas are egg-layers as opposed to being livebearers, and it's amazing to watch the courtship that goes on between a male and a female prior to fertilization. Love actually looks more like a battle, at least in the beginning, since males and females will fight with each other when forced to share the same territory.

When the male is allowed to see a female that sparks his fancy, he'll build a nest at the water's surface that is made out of mucus-coated air bubbles. When the female is introduced into his tank, he'll flare up at her and chase her around a bit. She will also flare her gills and fins as she attempts to hold him off. He'll show her his best side view to try to impress her as he shimmies and flares his fins. When the female is ready to accept him, she'll hold quite still as he approaches and rolls her over. His body drapes over hers like a horseshoe so their vents are close together, and he'll fertilize her eggs as she releases them. 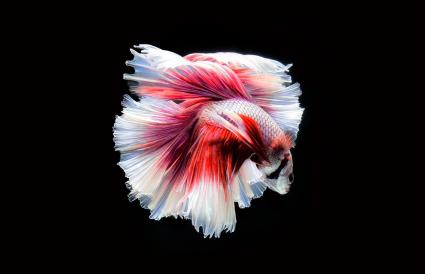 In one of those rare role reversals sometimes found in nature, it's the male betta that acts as guardian of the nursery. He'll drive the female away after breeding, so she must be removed to a separate tank. He then collects each egg and secures it in his nest. When the fry hatch, he'll guard them and carry them back to the nest in his mouth when they fall out and can't make their way back on their own. Once the fry are free swimming, it's time to transfer the male to a separate tank, or he'll begin eating his own offspring.

Whichever type of tank you decide to use, be sure it has a secure lid. Bettas can and sometimes do jump right out of the water, and there's not always a happy ending when their owners find them. If your betta escapes his tank, put him back in as soon as you find him, give him time to rehydrate and see if he's able to survive.

Fact Eight: Bettas Are as Varied as Snowflakes

Hobby betta breeders have selectively bred various mutations of betta splendens to create an incredible array of bettas in different colors, patterns and fin types. Some bettas have spots like a Dalmatian while others have a marble pattern on their body and fins. Some even have dragon scales that are overlaid with white, copper or even platinum. There are bettas with crowntails, half-moon tails, and even double tails. There's just no telling what kind of fascinating creature might turn up in the next batch of fry.

When you buy a betta in a pet store, you may see some with fancy names such as bumble bee, rosetail, or koi. These fish are marketed as different types of betta fish but in fact they are simply color variations that can be found in many varieties. Another "type" is the dragon scale betta which is actually a reference to the thick white scales and not to a specific type of betta.

Fact Ten: Bettas Were Named By a Danish Doctor

Bettas get their name from Dr. Theodore Cantor, who received some fish from the King of Siam in 1840. Dr. Cantor began to breed the fish and gave them the scientific name Macropodus pugnax (as in "pugnacious" for their aggressive nature). However, he learned that this name was already taken by a different breed of fish and so he changed the name to Betta splendens which means beautiful warrior after a warrior tribe in ancient Asia known as the Bettah. In Thailand, they are known as plakat (biting fish in Thai).

Fact Eleven: There Are at Least 14 Types of Betta Tails

Some of the most common types of betta tails are the veiltail, combtail, crown tail, delta, super delta, double tail, half moon, over half moon, half-sun, plakat, rosetail, feathertail, round tail, spadetail, and dumbo ear. Some of these are not really types but color and size variations.

Bettas kept in small bowls will have a shorter lifespan compared to bettas kept in filtered tanks. While there is a large variety of small, unfiltered and unheated tanks sold in pet stores that have lovely colors and designs, these are actually an unhealthy habitat for the fish. The recommend size tank is at least 2-1/2 gallons although 5 gallons is preferred.

Fact Thirteen: Bettas Can be Trained

Many betta lovers and animal trainers enjoy training bettas to do tricks, such as jumping out of the water to touch your finger or get food, swimming through a hoop in their tank, and targeting your finger or a stick. Bettas are trained using food or using a pen light combined with food, just like dogs that are clicker-trained. The light replaces the clicker.

Bettas, like most fish, sleep every day. Bettas also like resting on the bottom of their tanks or at the top of the water line. Sometimes owners may see him floating peacefully at the top of the tank and believe he is dead but a healthy betta is just resting. A favorite resting spot of bettas is on leaves, plants and even rocks and ornaments placed in the tank. If you place an artificial leaf with a suction cup near the top of the tank, you will see your betta resting their often.

The Ultimate Fact: Life Is Just Too Short

If you take good care of your betta and make sure he has high-quality food, clean water, and a little medication if he ever looks sick, he'll live about two to three years on average. Under optimum conditions, he could live as long as five years. Sadly, that time goes all too quickly so appreciate your betta and enjoy him while you can.